Inside the final two drives: John Rhys Plumlee’s awakening and the controversial finish in Oxford 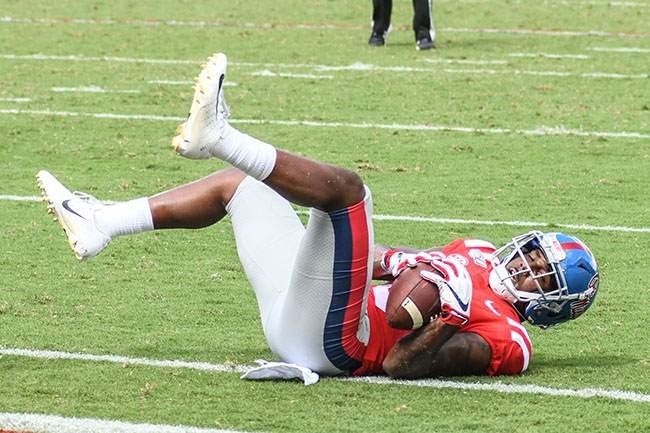 Mississippi wide receiver Elijah Moore (8) is down short of the goal line as time runs down against California at Vaught-Hemingway Stadium in Oxford, Miss. on Saturday, September 21, 2019. California won 28-20. (Bruce Newman, Oxford Eagle via AP)

Ole Miss and California was refereed by officials from the Pac-12 conference.

It doesn’t really matter what side you’re on; it’s easy to see that Ole Miss coaches, players and fans have a serious bone to pick with the way the final seconds of the game were officiated. And the worst part may be, it’s sort of overshadowing the play of Rebel freshman John Rhys Plumlee down the stretch to even put the Rebels in the position to tie it up late.

The Rebels took over at their own 10 yard-line, with 2:45 to play and down eight. Fast forward to the red zone, when a Plumlee rush for six yards set up a third and goal from the Cal three. Plumlee then hit Elijah Moore on a quick out route to the left. At quick glance in full speed, he appeared short. In television replay and freeze frames, he seemed to have scored. Officials ruled Moore down at the one and did not review, forcing Ole Miss to run a QB sneak as time expired. They didn’t convert.

“I don’t know what the protocol is, but you’d think (they’d review the play) in a critical situation like that,” said offensive coordinator Rich Rodriguez. “The clock’s running, so we’ve got to run a play. They have the ability to stop it and review it, I think, especially in a critical situation. I don’t know what the protocol is. I’m sure they’re going to be talking about it. I’ve had people text me and say he was in, but I’ll know more after I watch the film.”

“I thought, at the very least, it should have been buzzed and been reviewed,” Luke said. “We didn’t have a time out, we couldn’t spike it. Our only option was to get a quarterback sneak and get the ball off.”

The officials do not have to give official comment. To Moore’s credit, he took the issue with dignity.

“The refs call what they see. It’s no shame to them. So we’re just on to the next,” Moore said. “I was surprised (it wasn’t reviewed). But as I said, the game is over. We got Bama next.”

As for Mike MacIntyre, like Rodriguez, he comes from a Pac-12 background and has worked with these referees from the Pac-12. And he made his statement by saying that he wasn’t going to comment.

“I’m not going to comment on that. I’ve been fined $10,000 for that before,” MacIntyre said. “Not going to make that mistake again.”

The Pac-12 waited until well after midnight early Monday morning to release their statement on the matter. It read:

“The Pac-12 conference confirmed that the on-field game officials ruled correctly during the final two plays in the California-Ole Miss game Saturday, September 21, that Ole Miss did not score a touchdown and there was no irrefutable video evidence to reverse those calls by replay,” the statement read. “However, the conference would have supported play being stopped by instant replay for further review to confirm the on-field call of the second-to-last play of the game.”

Regardless of what really happened, the play should have been reviewed. It’s another in a long line of reasons that officials should have to answer questions asked of them after games, but the NCAA doesn’t mandate this.

The real sad part is that the above issue overshadowed the play of a young Plumlee seeing his first live game action.

Ole Miss starting quarterback Matt Corral had to leave late in the fourth quarter. The redshirt freshman Corral sustained a rib injury after being hit in the backfield. Corral got x-rays Sunday and the team will update on his status as they know details.

Forced into action was true freshman Plumlee. A late enrollee, Plumlee didn’t show up to practice with the team until fall camp. By Saturday against Cal, he had earned that backup role over fellow freshmen Grant Tisdale and Kinkead Dent.

“John Rhys got in there in a tough situation and competed and did some good things. He scrambled and gave us a chance at the end,” Rodriguez said. “He competed well, but Matt was injured… but he made some plays today. We’ll see what happens. Every day it’s important to evaluate everyone on the offense.”

Rodriguez joked afterwards that media was starting a quarterback controversy. Corral’s health will dictate the quarterback snap counts in practice this week, but if he’s unable to go, Plumlee certainly showed enough over the final two drives to have cemented that backup role.

In relief of Corral, Plumlee was incredible. He went 7 for 7 passing for 81 yards, including the most impressive throw of the day by either team – a 41-yard bomb on the run to Demarcus Gregory. Plumlee’s athleticism is also just at another level. He carried the ball 3 times for 53 yards, one of which was a 47-yard scamper on a read option, his first snap of the game.

“We talked with him several times about being prepared for his opportunity,” Luke said. “His opportunity came and he made the best of it. He made the play with his legs and I thought he ignited the sideline and the stadium. I was really pleased with him. So credit to him for staying ready and coach Rodriguez for getting him ready.”

Regardless of what happens looking forward, knowing Plumlee is confident (and maybe just good) coming off the bench is a great note for the Rebels. As far as looking backwards goes, it’s going to be hard to knot for the Rebels and their fans for a little while.