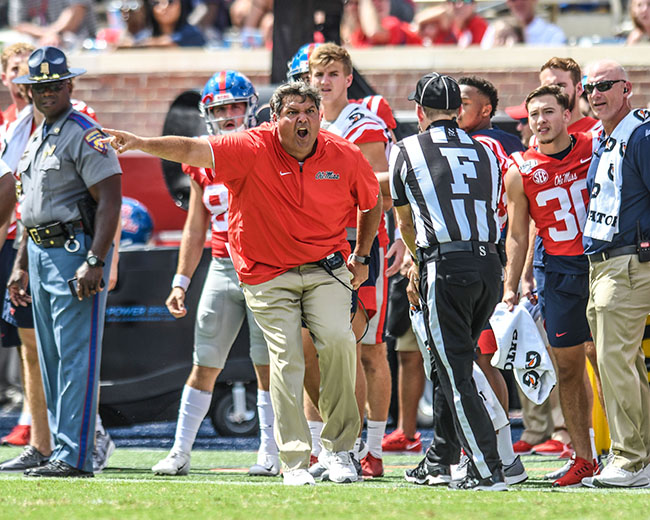 The remarkable comeback bid came just short. Forced to go to backup quarterback John Rhys Plumlee for the final two drives, Ole Miss nearly came back from a 15-point deficit. A final goal line stand for Cal stopped the Rebels as time expired, with Ole Miss losing at home on Saturday to No. 23 Cal 28-20.

Elijah Moore caught a ball on third down that appeared from some angles to be in the end zone and from other angles to be short. The officials ruled him short in a judgement call. It’s a judgment call that, at least, should have been reviewed. But so the play stands, and with it, the Rebel miracle comeback bid died.

“I thought, at the very least, it should have been buzzed and been reviewed,” said Ole Miss head coach Matt Luke. “We didn’t have a time out, we couldn’t spike it. Our only option was to get a quarterback sneak and get the ball off.”

That quarterback sneak, like the prior play, came up inches short.

Matt Corral and the Ole Miss offense looked really sharp early against a Cal defense ranked No. 15 in the nation by SP+. The Rebels accumulated 240 yards in the first half, scoring 13 points in the process. Cal forced Corral to keep the ball frequently on read-option plays, where he totaled 44 rushing yards and a touchdown in the first half. He also threw for 122 yards on a passing rating of 141.7 in the half. Unfortunately for the Rebels, it proved unsustainable.

Against a Cal quarterback in Chase Garbers that was yet to play well this year, the Ole Miss defense was horrendous. There were signs of struggle a week ago when Southeastern Louisiana threw for over 300 yards on Ole Miss. Then Garbers, who came into the night averaging 159 passing yards a game and completing just 53-percent of his passes, shredded the Ole Miss defense.

Garbers threw for 357 yards and 4 touchdowns against Ole Miss, completing 66-percent of his throws and throwing one interception.

It is a double-edged issue for Ole Miss defensively. They couldn’t get pressure on Garbers with four rushers, but the secondary couldn’t cover well enough to allow them to blitz.

“We have to do the little things better,” said linebacker Lakia Henry. “We have to get off the field in third downs. We have to keep believing in each other and play hard and fast.”

Following up a 60-yard touchdown pass from Garbers to tight end Jake Tonges, Ole Miss had a critical opportunity to cut the lead to one score early in the fourth quarter. Yet again, they just couldn’t get out of their own way. After a nice pass set the team up at first and goal from the Cal three yard-line, Ole Miss ran a four-play sequence that read: 2-yard rush, botched snap for a 10-yard loss, incomplete pass, missed 29-yard field goal.

John Rhys Plumlee looked incredibly athletic in relief of Matt Corral late and made one really nice throw that nearly lead Ole Miss down the field with a chance to tie the game. They might have even scored on the 3rd and goal, but Elijah Moore was ruled down at the one yard-line.

No matter what happens here this is insane and #OleMiss might have a QB competition brewing pic.twitter.com/42fGbpU6pS

The first two plays where Plumlee was on the field, he carried for 47-yards before handing to Jerrion Ealy for a 15-yard touchdown run to cut it to an eight-point deficit. The next drive was equally as impressive, completing a 41-yard pass on the run to Demarcus Gregory.

“We talked with him several times about being prepared for his opportunity,” Luke said. “His opportunity came and he made the best of it. He made the play with his legs and I thought he ignited the sideline and the stadium. I was really pleased with him. So credit to him for staying ready and coach Rodriguez for getting him ready.”

Above all, this game raises critical questions for Ole Miss. What happened there at the end? Was Elijah Moore in the end zone? Who will play quarterback for Ole Miss moving forward? And what has happened to this defense? All these questions need answered in the coming days.

And for the Rebels, the road doesn’t get any easier. The secondary that struggled today against a below average power-five offense and quarterback will go on the road next week to play Alabama and arguably the best quarterback in the nation in Tua Tagovailoa.