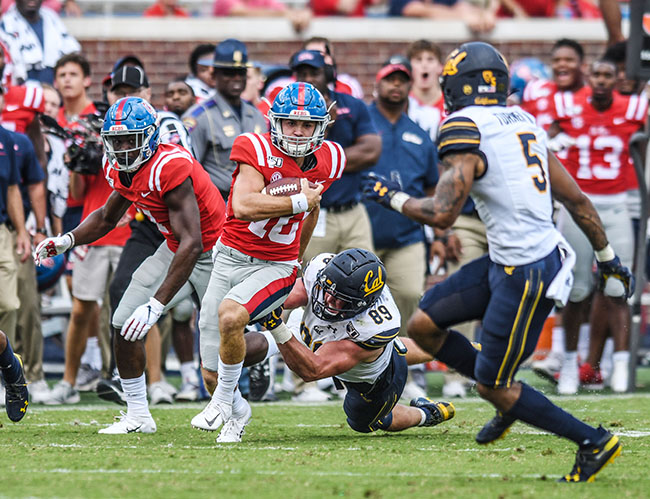 When Ole Miss takes the field on Saturday in Tuscaloosa, Ala. they’ll be doing so in a manner done by no Rebel team in the recorded history of the program.

At the time of writing, Ole Miss is 35.5-point underdogs (+35.5) against Alabama on the weekend, the largest spread going against the Rebel team since databases started recording professional gambling lines.

Oddshark.com has only been around since 2008, but they have an online database of point spreads dating back to 1990. No, it doesn’t go all the way back to your uncle Frankie’s bookmaking service ran out of his 1960 Chrysler Valiant in Hoboken, New Jersey, but you get the point. It’s about as detailed of a free database as you’ll find on the web.

Only twice over the course of recorded data (since 1990) has Ole Miss been underdogs of 30 or more points. In 2011, they were 31.5-point underdogs at home to the LSU team that would lose to Alabama in the 2011 National Championship. Again in 2012, Ole Miss was 32-point underdogs at a similar game in Tuscaloosa. That Alabama team was the AJ McCarron, Eddie Lacy, C.J. Mosley team that obliterated Notre Dame in the 2012 National Championship.

Ole Miss lost both of the above games, going 1-1 against those preposterously high spreads. The 2012 game in Tuscaloosa was actually somewhat competitive, with Ole Miss losing just 14-33. But both show just how high the +35.5 number is on this Saturday.

Expanding the search history a little bit, Ole Miss has played just six games since 1990 when they are 25 point or larger underdogs. They are 0-6 in those games, but did cover half of the time, going 3-3 against the spread. If you want a number in Ole Miss’ favor, the team is actually 11-6-1 against the spread in games where they are  20 point or larger underdogs. The only such game, since 1990, that they won outright came in September of 2008, a 31-30 win at Florida. The Rebels were 23-
point underdogs in that one.

Ultimately, all this dictates is just how good this Alabama team is. In their first four games, two against power-five teams, Alabama was on average a 36-point favorite. In their SEC opener, home to South Carolina, they were 26.5-point favorites. South Carolina covered. For an Ole Miss team traveling to Tuscaloosa, keeping it within a few scores and showing some progress in non-calculable areas against one of the best teams in the nation should be thought of as a success.