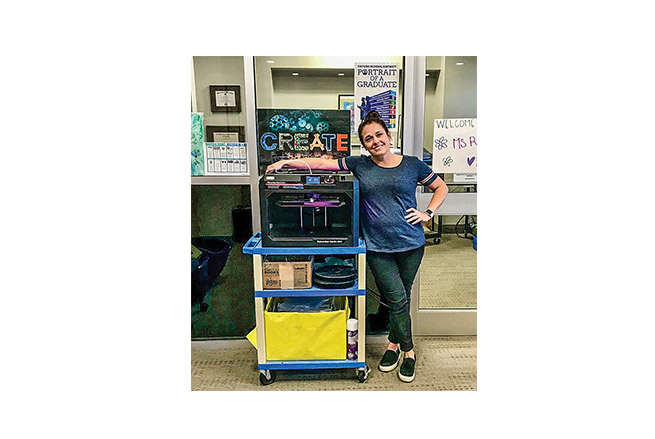 Oxford High School’s librarian has been published for her work with 3D printers in the Journal of the American Association of School Librarians, “Knowledge Quest.”

Amanda Osborne purchased a 3D printer with a $6,000 grant she received from the Oxford School District Foundation. She began thinking about 3D printing in 2014 when she learned the Mississippi Library Commission would loan school libraries a printer for their programming.

Being curious about the technology and wanting to share the technology with the students of OHS, Osborne had the opportunity to partner with the Lafayette County and Oxford Public Library to bring a loaner 3D printer to the high school’s library. Using the loaner printer was when Osborne felt the school needed a permanent 3D printer of their own for the libraries maker-space.

Once Osborne received the funds, she worked with OHS English II teacher, Brittany Franks, to use the printer to help students make gingerbread houses to display at the University of Mississippi’s Gertrude C. Ford Center for its annual Gingerbread Village.

“Investing in technology for the school library ensures that all students, regardless of their achievement on standardized tests, will have access to innovative tools to learn digital skills necessary to thrive in 21st-century college and career environments,” Osborne said.

Oxford High students have since used the printer for science fair projects, AP world history prototypes, replacement mouthpieces for band instruments and building molecular atom sets for biology classes and reading fair projects. The 3D MakerBot Replicator Plus uses a PLA filament, which is a vegetable-based plastic material made of cornstarch that is melted and then layered to create the design.

This year, Osborne received an additional $5,000 grant from the OSD Foundation to purchase 30 OculusGO virtual reality stand-alone headsets. Biology students used the headsets to take a virtual journey through the human cell.