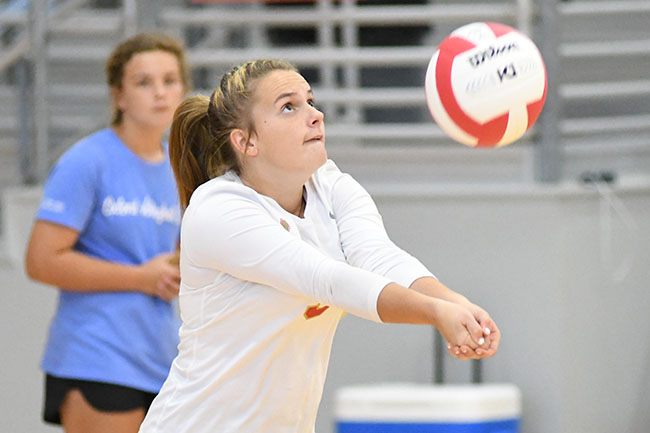 It hasn’t been the easiest year for the Lady Commodore volleyball squad, but despite their 7-15 record, their playoff hopes are still alive.

Lafayette dropped two home games on Tuesday night, falling 1-2 to 1A Hickory Flat and 0-2 to New Albany; however, neither were division games. The real test will be in their final two games against Lake Cormorant and Center Hill. They’re winless against those two so far, but still have a shot at the 5A playoffs if they sweep round two.

“Just tonight, Hickory Flat plays a very non-traditional type of volleyball and we didn’t respond well to it,” head coach Clint Jordan said. “They’re good, they were in the final four last year of their classification. But we just weren’t able to adjust quickly enough.”

After dropping the first set and winning the second, Lafayette had a solid third set lead over Hickory Flat but couldn’t hold on down the stretch. New Albany was not as close.

But there’s a good bit of volleyball still to play. With this young Lafayette team, just two members of their regular rotation are seniors, they are starting to put the pieces together after a really tough start to the year. Right now, they’re just searching for consistency.

The team went into the St. Andrews Showdown last weekend, going 2-2 and getting big wins over Madison-Ridgeland Academy and New Hope, but just couldn’t seem to keep the momentum rolling into this week.

“We’ve improved a lot. We really have. And the scores won’t show that, losing 3-0 to Lake Cormorant and 3-0 to Center Hill. But every game we’re in is competitive,” Jordan said. “We’re right there, but we still haven’t found out the secret of winning. We’ll play well like we did this weekend, then turn around and have a mental shutdown. Those things happen when you’re young, but we are getting better. We just have to finish.”

There are just five games left in the Commodore regular season. They’ll play Oxford next Tuesday, with the critical divisional matchups against Center Hill and Lake Cormorant coming October 3 and 10. For now, playoff hopes remain alive.