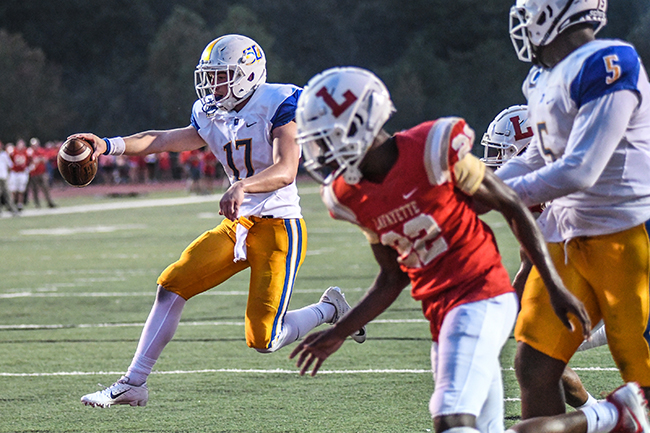 And now the real season begins.

Lafayette,  Oxford and Water Valley could have all started the season winless to this point and still win state. This week marks the start of regional play for both Lafayette and Oxford, the start of the season’s slate against teams in their classification and region that qualify them for playoffs. Water Valley has one more week until they get to this point.

Both the Commodores and Chargers took last weekend off, a needed bye week before the grind of the regional schedule. They also both get to open this portion of the schedule at home, with Lafayette hosting defending 5A state champs West Point and Oxford hosting Southaven. As much as the early season results are good predictors and testing points for where the teams are at, this week is when the results begin to add up.

This week marks the end of a brutal three games in four weeks stretch for the Commodores. A month ago, they knocked off defending 6A champion Horn Lake. But two weeks ago was a good wakeup call for Lafayette, losing 46-7 to Oxford in the Crosstown Classic. This week, they get to host for the most important game on the schedule: defending 5A champion and regional opponent West Point.

A year ago, the Green Wave ran through just about everyone, finishing 14-1 and winning 5A states. Their only loss in that 2018 season was at 6A Starkville. Last year’s Lafayette-West Point game was a thrill ride. Lafayette scored 13 in the second quarter, but it was their only points, losing 14-13 on the road. This year they’re coming for their revenge, and this West Point team might be a bit more vulnerable.

At 4-1 on the year, West Point actually lost a game on the road at 4A Louisville (3-2) in week two of the year. That said, this is a team that has beaten Starkville and is currently No. 4 in the state. For Lafayette to pull out the win – they haven’t beaten West Point since their jump to 5A – they’ll need to get more push in the run game than they did in the Crosstown Classic.

Where Lafayette gets a game that’s been circled on calendars, it’s a little different for Oxford. They’ll host 1-3 Southaven on Friday night, a Charger-on-Charger matchup. Southaven’s only win this year has come on the road against Collierville, but they actually played Lafayette pretty close a few weeks back, losing 16-20.

Coming off the Little Egg Bowl loss a month back, Oxford has looked really strong. They’re outscoring opponents 79-21 over the last two games, including the complete domination in the Crosstown Classic. It’s a team that’s clicking at just the right time.

Look for Oxford to try and get KJ Wadley and the running game going a little more in this one. Wadley didn’t play in the week three win over Grenada and then was held to 20 yards on seven carries against Lafayette. They’ll need more from their starting tailback as the season progresses, and this is a good opportunity to get him going.

The Blue Devils are in search of a bounce back week, but don’t get an easy opponent to do so against. Water Valley lost their first game since October 2018 last week, on the road in Calhoun City. Now they’re back on the road taking on one of the better teams in 3A football, 4-1 Winona.

Water Valley only fell two spots in the 3A polls after last week’s loss, from No. 2 to No. 4. A large part of the issues a week ago stemmed from a basic inability to move the football. After averaging over 32 points per game in their first three games, Water Valley scored just seven and threw for just 25 yards.

Senior quarterback Jacob Truss needs to be better, and he knows it. The good news, is Winona has shown to not be great in pass defense. Two weeks ago, they gave up 290 yards and three touchdowns through the air.