Oxford opens up 1-6A play with dominant win over Southaven 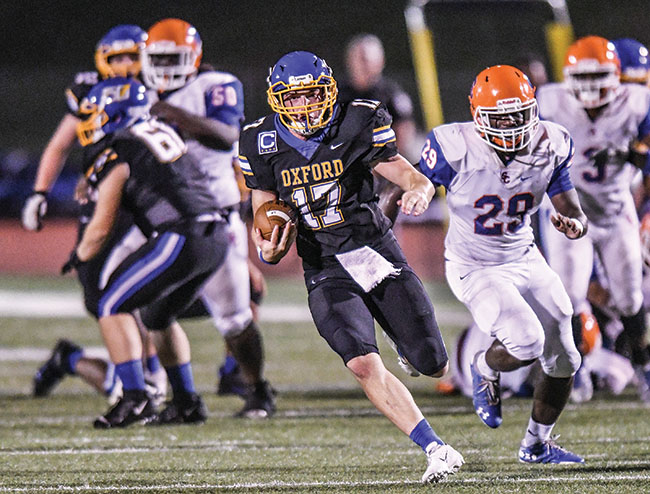 On Friday night, the games began to matter for Oxford.

Coming off their dominant win over crosstown rival Lafayette two weeks ago and a bye week, the No. 7 Chargers kicked off their Region 1-6A slate with a convincing victory.

It was more of the same with the Chargers of Oxford easily defeating the Chargers of Southaven 45-8 at Bobby Holcomb Field, but it could have been much worse. Despite having an average field position that started on Southaven’s side of the field, penalties and missed opportunities kept Oxford from putting the game away sooner than they did.

Two missed field goals by Jack Tannehill and two touchdowns wiped away on the same drive by penalties were the only reasons Oxford (4-1, 1-0 1-6A) kept Southaven (1-4, 0-1) in the game. The Chargers led 17-0 at halftime.

“We definitely talked about it at halftime that we left a lot of points on the field,” Oxford head coach Chris Cutcliffe said. ”We wanted to come out and play much better in the second half and, offensively, I was proud of us for doing that.”

The second half was a different story for Oxford, who cashed in on the opportunities Southaven, and their defense, provided them. Southaven went for it on fourth down for the second time in the game early in the fourth quarter, but failed to convert. On the next play, Oxford quarterback John Meagher ran the ball in from 24 yards out for his second rushing touchdown of the game.

Oxford scored a touchdown on each of their second-half possessions.

Meagher led the Charger offense with his feet, rushing for 100 yards and two touchdowns on 14 carries. The senior also threw for 136 yards and three touchdowns, completing 9 of his 16 pass attempts.

“John makes plays consistently and I thought his decision making was very good tonight,” Cutcliffe said. “Obviously, he made some nice plays with his legs and made some nice throws as well.”

The Charger defense continued where it left off at Lafayette two weeks ago and stifled Southaven from the opening drive. Southaven was forced to punt their first four possessions. Their last two possessions of the first half ended with a turnover on downs and an interception by Byron Pearson at Oxford’s 1 yard-line late in the second quarter.

Southaven got on the board in the third quarter when quarterback Jordan Hibbler connected with Donovan Munn for a 14-yard touchdown pass.

“Defensively, I thought we played well in the secondary,” Cutcliffe said. “I thought we played a really complete game. (Southaven) are extremely talented on offense. They’ve got playmakers all over the field. I was proud of our guys for coming right at them and matching up well.”

Oxford will have a quick turnaround next week, traveling to Lewisburg on Oct. 3 for a rare Thursday night game.

Lafayette stumbles late against West Point in Region 1-5A…