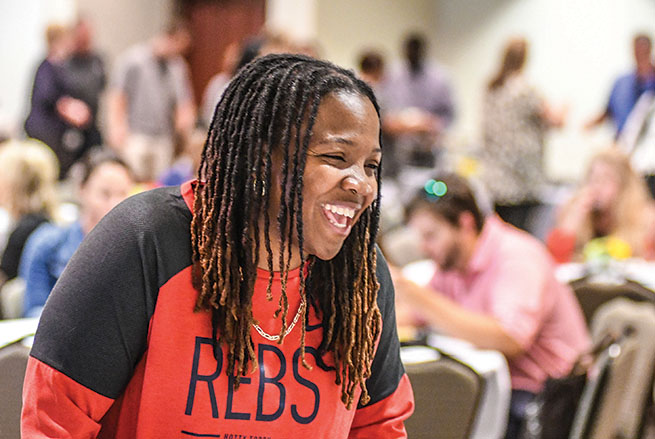 Yolett McPhee-McCuin greets those in attendance at the United Way campaign kick-off before speaking at the annual luncheon in Oxford, Miss. on Wednesday, September 25, 2019. (Bruce Newman, Oxford Eagle via AP)

The United Way of Oxford-Lafayette County began its 49th year of community service with its annual kick-off luncheon at the Oxford Conference Center on Wednesday.

Every year, UWOL provides hundreds of thousands of dollars to programs and coalitions serving the LOU community. The UWOL receives funding from grants, but the needs throughout the LOU Community are significant each year and far exceed the amount of money given through those grants. The nonprofit organization also relies on community members, local businesses and public entities’ support to properly carry out their mission in the LOU community.

Wednesday’s luncheon honored those who help UWOL throughout the year. The event also featured stories of impact from people in the community that have seen how UWOL has helped throughout Oxford and Lafayette County.

“One thing I love about our organization is that we touch every age group and demographic in our community,” said Kurt Brummett, executive director for UWOL. “We often think it takes a large donation to make a difference. …Thousands of people benefit from every donation that we receive and it’s all stays here in the community.”

During the luncheon, Mary Margaret Andrews of Doors of Hope, interim Oxford Police chief Jeff McCutchen and Oxford native Chauncey Pegues spoke about the impact UWOL has made in their respective professions and their way of life.

For Pegues, the impact UWOL had on her was life-changing. She took advantage of Lafayette County Literacy Council’s Adult Basic Literacy Education program, which helped her earn a GED. Because of the Literacy Council offering the ABLE program, Pegues was able to use her GED to get into beauty school and now works as a nail technician.

“I was so glad I got my high school diploma. It was a void that needed to be filled because I wanted to do better,” Pegues said. “I knew once I got that paper in my hand, I knew I was going to the next level.”

Ole Miss women’s basketball head coach Yolett McPhee-McCuin was the featured speaker at the luncheon. The second-year coach spoke about the commonalities she saw with UWOL’s kick-off event and the Lady Rebels upcoming season, beginning in November.

“Whatever you have as your goals, try and beat it this year,” McCuin told the audience. “Compete; there’s an athlete inside of all of us. It’s in us to compete and to compete against what you did last year and to improve. Because this community needs us and there’s someone out there that is watching you and inspired by you, just like I am sitting here today.”