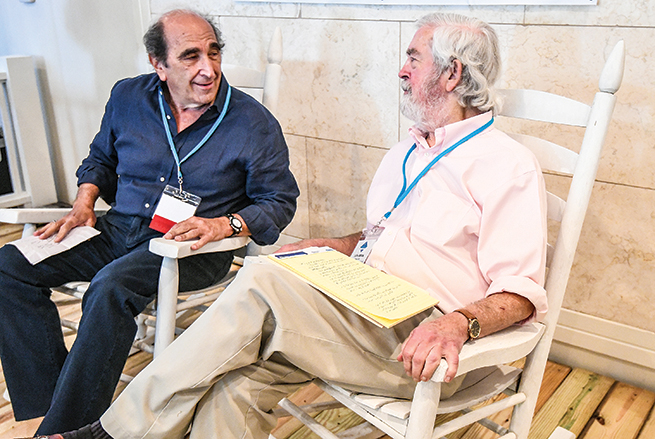 On Thursday and Friday, Taylor and the Plein Air community hosted the fourth annual Conference on the Front Porch, highlighting the importance of the front porch in society.

This year’s conference felt very timely with slate of speakers in relation to current events of the country and the world. Between the news coming out of Washington, D.C., to the wildfire in the Amazon Rainforest, the front porch at Plein Air served as a window to the world.

“We’ve tried to create in this conference something that I don’t think exists in the state of Mississippi,” said Campbell McCool, director of the Conference on the Front Porch. “Our stated purpose is about the front porch and what it represents. …What we hear from people who attend this conference over and over is there is nothing else like this out there.”

On Friday, former Boston Globe reporter and current Ole Miss professor Curtis Wilkie hosted a discussion with NBC News chairman Andrew Lack. With President Donald Trump facing a potential impeachment hearing, most of the hour spent with Lack and Wilkie centered around how the network and cable news channels handle coverage of the nation’s 45th President.

Lack, who founded the nonprofit news organization Mississippi Today, took several questions from the audience about the state of national and local politics and the evolution of cable news networks toward having partisan programming, especially their primetime shows and commentators.

“We’re living in very complicated times,” Lack said. “We’re living in a very 52-48 world. It could go either way. Nearly 20 years ago now, we had (Al) Gore and (George) Bush go to the Supreme Court to figure out who won. So, we’re in that territory still and the divisions amongst us, I hope they’ll lead to better conversations that we need to have as a country. It begins with your next-door neighbor. So, keep talking.”

During the first day of the conference, Dr. Mark Plotkin spoke about his efforts with rainforest conservationism. Plotkin is the president of the Amazon Conservation Team and is an expert in rainforest ecosystems. In August, historic wildfires began that plagued Brazil and burned at a rate that was considered the fastest since 2013.

Other speakers included author Ace Atkins and Brian Jones, who has written extensively about man’s search for meaning in an increasingly dystopian society.

Attendees of the conference took a tour of William Faulkner’s Rowan Oak home on Friday, which concluded with an outdoor dinner at Plein Air and a private concert by the Kudzu Kings.