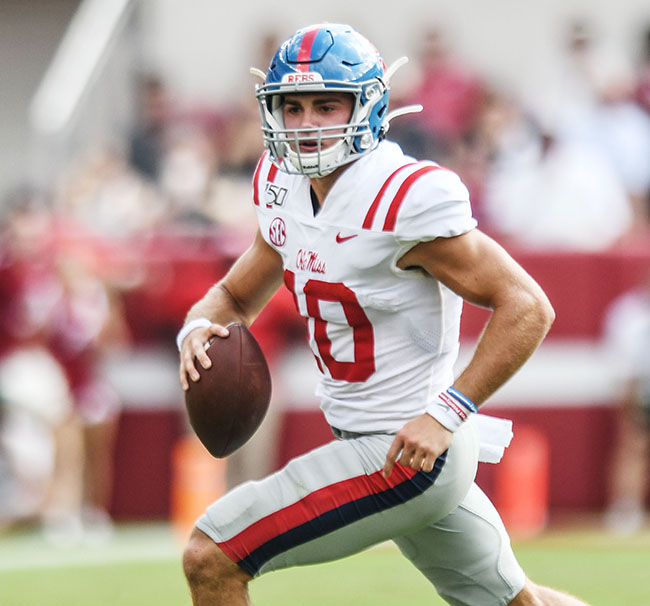 TUSCALOOSA, Ala. – It’s hard to evaluate any quarterback’s performance when he’s playing the number two team in the country, at that team’s home field.

This becomes especially true when the starting quarterback is a true freshman making his first ever start, and that number two team is Alabama and the team is playing them in Bryant-Denny Stadium.

With Matt Corral sidelined with bruised ribs, Ole Miss turned to an even younger face. John Rhys Plumlee, a true freshman from Oak Grove High School in Hattiesburg, made his first career start at quarterback for Ole Miss. Plumlee looked athletic and confident. He played about as well as one could expect from an 18-year-old making his first start on the road in Tuscaloosa.

“It was exciting. It hurts we lost. You always want what’s best for the team, but it was exciting,” Plumlee said. “No nerves, I was really more excited than nervous… I have to get better. But as a team we can all get better at the little things, for sure.”

At times early, the Ole Miss play-calling made it seem like they were scared to let him throw the ball. In the first half, he attempted just 11 passes. Offensive coordinator Rich Rodriguez opened things up more for Plumlee in the second half, attempting 17 passes in that frame.

As a whole, the numbers won’t seem pretty – because they weren’t. Plumlee completed just 10 of 28 attempts for 141 yards, two touchdowns and one interception. The interception came late, forcing a throw across the middle in a blowout, just trying to put more points on the board. But he showed flashes of why Ole Miss believes the true freshman could thrive – and he did so against Alabama.

Early in the fourth quarter, with the game already out of hand, Plumlee hit Jonathan Mingo on a beautiful, 26-yard back shoulder throw for a touchdown. That play came on a fourth-and-seven, a fun connection between two true freshmen who both hail from Mississippi.

“I told the guys before the game, ya’ll are going to get 100-percent from me. I just asked the same from them,” Plumlee said. “We have a lot of talent. But as I said earlier, if we can get the little things and work on the little things, we have the potential (as a freshman class) to be really special.”

Then there’s the running. Pure athleticism is what got Plumlee this job in the first place. When he came in against Cal a week ago, the first play resulted in a 52-yard run on a zone read. Saturday in Tuscaloosa, Plumlee carried 25 times for 109 yards and one touchdown. His threat as a rusher also opened up running lanes for the backs, as the team rushed for 4.8 yards per carry against a good Alabama defense.

“For a true freshman, in his first start, in this environment against that quality of team, I thought he acquitted himself very well,” said offensive coordinator Rich Rodriguez. “There were probably a few plays he’d like to have back. But I was probably as impressed, talking to him after every series, as to what he was seeing. His eyes were in the right spot and he knew what was going on. For his first time starting, that was pretty good.”

What’s next for Plumlee? That’s a valid question. Matt Corral could return next week and start against Vanderbilt. Corral, who was diagnosed with bruised ribs but didn’t even attempt to warm up at Alabama, also may be more hurt than Ole Miss wants to let on.

When Rodriguez was asked if Plumlee showed enough in Tuscaloosa to earn snaps when Corral is healthy, he didn’t mince words: “Yea. I think you look at everything. I think coach Luke would tell you the same thing.”

Even if Corral is healthy, Ole Miss might want to see what they have in Plumlee against a more beatable Vanderbilt team. Regardless of what the future holds, Ole Miss saw enough positives from the true freshman to give them hope if they need (or want) to turn to him moving forward.

No. 2 Alabama rolls over Ole Miss in Tuscaloosa