No. 2 Alabama rolls over Ole Miss in Tuscaloosa 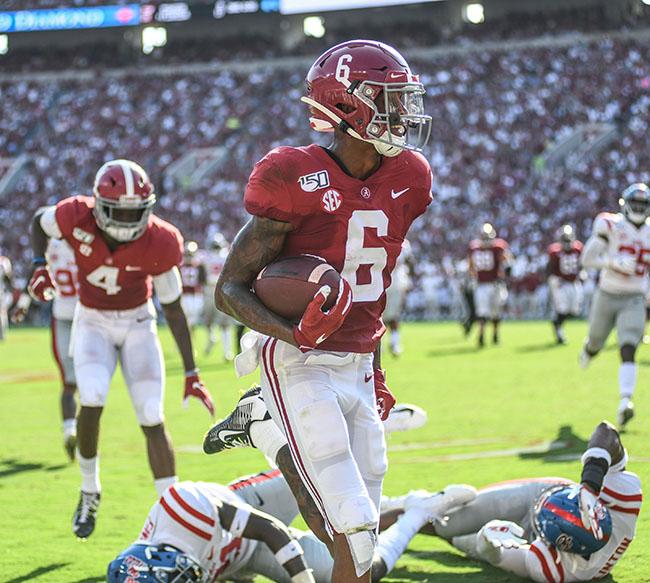 TUSCALOOSA, Ala. – The University of Alabama had not trailed all year until they fell behind 7-10 to Ole Miss late in the first quarter.

Ole Miss hung around for a little while, but No. 2 Alabama, unsurprisingly, proved too much. The Tide rolled on Saturday, topping Ole Miss 59-31 to remain undefeated in 2019.

“It’s a tough loss,” said Ole Miss head coach Matt Luke. “We tried to run the ball early, to try and make this a four-quarter game. But the middle of the second quarter got away from us and we never recovered. I’m proud of the guys for battling and competing, but we’ll move forward and continue to get better.”

The Rebels started alright. After surrendering a 74-yard touchdown pass on the fourth play of the game, they then went three-and-out on offense. But the Ole Miss special teams that has struggled so much this year recovered an Alabama fumble on the punt, setting up a 10-point Rebel scoring run.

A touchdown from John Rhys Plumlee, making his first career start, and a field goal on the next Ole Miss drive made it the first time Alabama had trailed all season. Ole Miss wouldn’t score another point until the fourth quarter.

The Achilles heel of the Rebel defense through four games has been their inability to defend the pass. When you’re playing the presumptive No. 1 pick in the 2020 NFL Draft at his place, that’s going to be an issue. Tua Tagovailoa carved up the Ole Miss secondary to the tune of 418 yards and six scores.

Alabama wide receiver DeVonta Smith scored his fifth receiving touchdown early in the third quarter. That five is just one less touchdown than Ole Miss has through the air all season.

“They’re the best wide receivers I’ve gone against in college,” said Ole Miss defensive coordinator Mike Macintyre. “The closest I’ve seen to them is when I was with the Dallas Cowboys or the (New York) Jets. They’re really good and then the quarterback is extremely accurate.”

In the end, the big point of note from this mid-year trip to Tuscaloosa is what happened behind center for the Rebels. We’ll write a whole separate piece about true freshman Plumlee’s first career start later this evening, but simply put, it was fine.

Plumlee was okay. He threw for 141 yards and one score on 10 of 28 passing, adding over 100 rushing yards on the ground. He scored three times and threw one interception. He wasn’t impressive as a passer but showed a lot in the ground game.

“I thought John Rhys competed well,” Luke said. “Coming into a tough environment, we didn’t have a whole bunch of pre-snap penalties. I thought he managed the game well and used his legs effectively.”

Ole Miss scored early, Alabama went on a massive run in the second and third quarters, and then Ole Miss got a little more offensively again late.

Early in the fourth quarter, a fourth-and-seven play, Ole Miss connected on a Plumlee to Jonathan Mingo 26-yard touchdown to cut Alabama’s lead to 52-24. Say what you want, but the 31 points Ole Miss scored on the Tide are more than they’ve given up all season.

It wasn’t pretty, but at the same time, it’s about what you expect from a team battling just to appear in a bowl game going up against No. 2 Alabama. Ole Miss showed some good things, some encouraging things, but Alabama is just too much.

Following the loss, Ole Miss returns home next weekend. The Rebels get a primetime game next weekend, a 6:30 showdown with 1-3 Vanderbilt.

Oxford opens up 1-6A play with dominant win over…