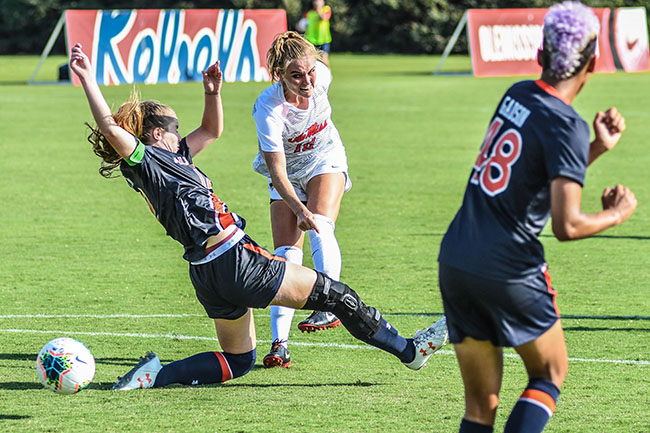 Ole Miss pulled out a thriller in Oxford on Sunday, defeating Auburn 1-0 behind a golden goal by Channing Foster.

The first half didn’t feature too much action, with Ole Miss taking a 4-2 advantage in shots into the break but both teams managing just one on target.

After a few half chances on both sides in the early minutes, the contest very much turned into a midfield game for the final 30 minutes of the half with neither team willing to throw too many numbers forward, resulting in a scoreless tie at halftime.

The next 45 minutes provided much of the same, with both teams scrapping to break down the opposing defense and create space. Neither side had much success until the final few minutes, when both had great chances to bag the winner.

The Rebs had the first great chance, with Molly Martin finding herself all alone in the box in the 85th minute on a ball over the top. The junior looked poised to head home the potential winner but couldn’t get her angles right, sending the shot wide.

A few minutes later, Auburn looked to have a good look at goal for a shot from the top of the box but an excellent defensive play by Haleigh Stackpole averted danger as the sophomore slid in and nabbed possession for Ole Miss.

For the third straight game the Rebels were forced to play extra minutes in overtime but the wait was well worth it.

It all started with a goal kick by Orkus, who hit Jenna Kemp at midfield. Kemp laid a ball ahead for Lonnie Mulligan and the Hattiesburg product put on the afterburners, racing past the Auburn defender, winning a challenge and laying off to Foster. The rest was all but inevitable as Foster set the ball up on her left foot and found the corner for the golden goal.

Undefeated in its first three SEC matches and with five points in the league table in hand, Ole Miss turns its attention to No. 13 Arkansas, taking on the Razorbacks on Thursday night in Fayetteville.

Quick Kicks
• The golden goal was the second of the season for Foster, who also scored the winner in double overtime at WKU.
• The score was the 27th of the junior’s career, leaving her all alone in 10th place all-time at Ole Miss.
• Sunday’s victory was the third overtime win of the season for Ole Miss (in five OT games). The Rebels had no OT wins either of the last two seasons.
• The win is the second in a row over Auburn for Ole Miss. The Rebels are undefeated in their last six meetings with the Tigers (4-0-2 record).
• Freshman Jenna Kemp made her Starting XI debut in the match, in her ninth appearance of the season.