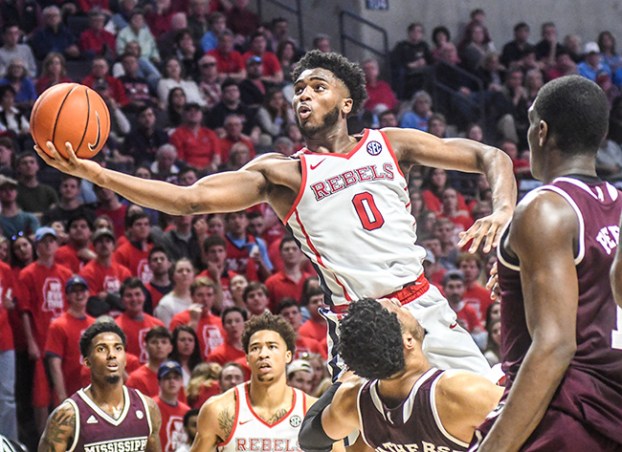 Over the course of the last month or so, Ole Miss basketball has been without one of their key contributors – sophomore Blake Hinson – due to undisclosed health issues.

Head coach Kermit Davis said he doesn’t know, or did not want to disclose, the specific diagnosis of Hinson’s issues, but described it as a “blood abnormality” that has kept him away from practicing with the team.

Hinson went home in August following team activities and simply wasn’t feeling well, Davis said. One of the stronger workers and most active voices on the team didn’t want to practice and wasn’t feeling right. Hinson saw doctors in his home in Florida, but Ole Miss wanted to get him back to Oxford to work with team physicians.

“He’s really improving, and we’re hoping to get Blake back at some point in the next few weeks,” Davis said. “We still have to get these last tests back, but everything’s been a lot more positive lately. He’s back now on his own, starting to run on his own, shooting. He hasn’t done anything with the team since he’s been back. But we’re just waiting right now, for these next tests to come back. But we sure hope we can get him back sooner than we thought at one point.”

Hinson went through another series of blood tests earlier this week, of which the results are still unknown. Davis said he’s hopeful to get the sophomore back within the next two or three weeks, but he also said he didn’t want to put a timetable on Hinson’s recovery, as so much is still unknown. That said, according to Davis, the young forward is both feeling much better and looking much better than when he was first going through the initial series of blood work.

#OleMiss HC Kermit Davis confirmed that sophomore Blake Hinson has been out the last handful of weeks dealing with what the team is describing as a ‘blood abnormality.’ pic.twitter.com/R7e13Y59GD

One of the key contributors in the Rebels’ run to the NCAA Tournament a year ago, Hinson made 31 starts for the Rebels as a true freshman. He averaged 8.3 points per game on the season, capitalized by a 26-point outburst on the road against rival Mississippi State. Fans and teammates grew to love Hinson for his fiery attitude and his unrelenting energy, something you don’t see often from such a young player.

“We’ve missed him. I’ve missed him,” Davis said on Monday. “It’s been great to see some of the other guys develop, but we’ve missed his voice. That’s one of the reasons he started last year, so many games, is because even as a freshman his voice was the best in the gym defensively. It’ll be good to have him back.”

Ole Miss starts the 2019-20 season at home on Nov. 8 against Arkansas State. For now, Hinson’s status in that opener is uncertain at best. The Rebels’ main concern is getting the sophomore completely healthy before any basketball evaluations can be made.

Sam Kendricks is at it again, this time in Qatar. The Oxford native, Oxford High School and Ole Miss great... read more