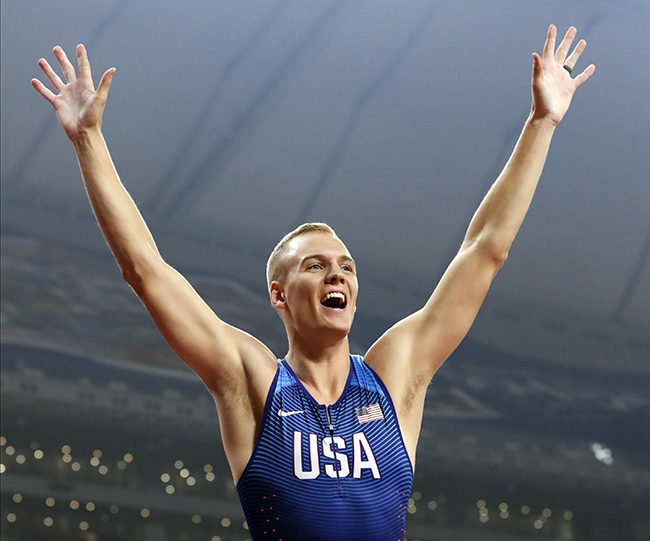 Oxford’s own Sam Kendricks is the 2019 IAAF World Champion in the pole vault.

Competing Tuesday in Dohah, Qatar, Kendricks had to fight hard with Sweden’s Armand ‘Mondo’ Duplantis to win gold in the pole vault. With a clearance of 5.97 meters, Kendricks became just the second person in history to win back-to-back pole vault championships.

“A great competition is the sum of the effort, really,” Kendricks said afterward on TV. “It got messy. Miss. Make. Miss, miss, make. Somehow I went from first to second, and only by the merit of misses early in the competition was I able to make the clutch jump and take the win. 6.02 (meters) was in both our eyes, but because it was such a messy card, it was a hard bar to make.”

Duplantis, Kendricks and Poland’s Plotr Lisek pulled ahead from the rest of the field early. Long before the event was over, the three had cemented their spots as the three medalists. Lisek topped out at 5.87 meters, leaving just Kendricks and Duplantis remaining.

In a fun turn of events, the final pairing resembled an all-too-familiar SEC West showdown. Duplantis is a former LSU athlete, where Kendricks is obviously that of the Ole Miss Rebels.

By clearing the 5.92-meter bar on his first attempt, Kendricks jumped out ahead of Duplantis into first place. Both Kendricks and Duplantis needed their third attempts to clear 5.97 meters. Since Kendricks led, when Duplantis failed to land his third attempt at 6.02 meters, he became the champion without having to clear it himself.

After the victory, it was Kendricks’ coach – his father – who handed him the American flag from the stands to celebrate.

“If anyone would hand it to me, it would be (my dad),” Kendricks said. “He always has a tendency to cheat fate. He brought the flag for just such a thing that I would medal, and he didn’t tell me. When you respect the competition, you can’t ever take for granted that that might not happen. It’s certainly a gift every time.”

Kendricks, a 2016 Olympic bronze medalist, broke the American record back in June, jumping 6.06 meters. On Tuesday, he was content just winning the gold without going for that third attempt at 6.02 meters.