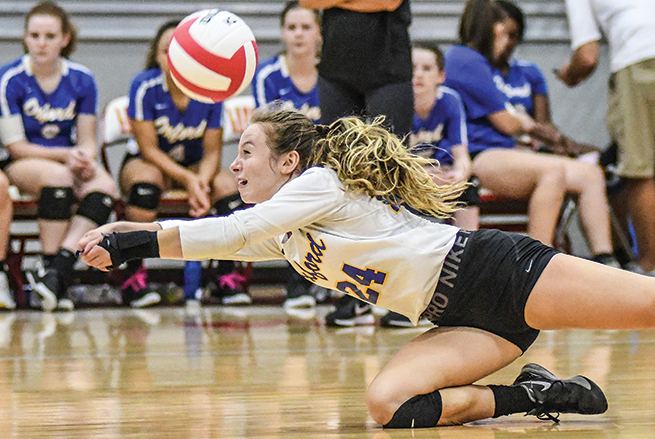 Lafayette gave Oxford all they could handle on Tuesday night.

Looking purely at history, classification and season records to-date, Tuesday’s crosstown volleyball matchup shouldn’t have been all that close. But Lafayette, playing the second leg of the series at home, had other plans.

“I think we go into these games feeling like we have something to defend,” Oxford coach Kacie Hengler said. “They have no fear and nothing to lose, so they always come into these games against us strong, which is great.”

The first set went about to thought. Oxford built up a 20-12 lead, before allowing a pretty significant Lafayette run. Oxford won the first set, but did so 25-22. The Lady Commodores’ 12-5 run to end the set ended up being a foreshadowing moment in the match.

In a matter similar to the end of the first set, Lafayette had another run in them during set two. Oxford held small leads for much of the back-to-back set. Trailing 16-18, Lafayette went on another significant run, but this time was able to win the set, 25-22. Tie match.

Losing that second set should’ve been a wakeup call for Oxford, but it never came. Again, Oxford built up an early lead, before letting Lafayette crawl back and tie the third set at 21. The third set was tied at 21, 22, 23, 24, 25, 26 and 27 before Lafayette finished off their second straight set, winning 29-27.

The Oxford wakeup call didn’t come until the fourth set. With their backs against the wall in a tie at 15, Oxford went on a 6-0 run. Much like they had in every other set, Lafayette wouldn’t go down easily. They brought the Oxford lead back down to three, before the Chargers were able to get over their comeback demons. Oxford forced the fifth set with a 25-19 fourth.

Oxford exerted themselves late in the fifth, putting the pieces together to pull out a 15-12 win in the final set.

“I don’t know if it’s a wakeup call,” Hengler said. “But games like tonight help. We’ve been without a few girls and these non-conference games give us a chance to mix things up. We don’t play a lot of five-set games, and a true humbling here and there is good for them.”

Loss notwithstanding, Tuesday night was the best Lafayette has played all season. Taking a set from the Chargers was huge for this team that simply hasn’t seen the results to match their improvements over the course of the year.

Interestingly, it’s been a trend. Lafayette looked like a team much better than their current record when playing at Oxford to start the season. They lost the season opener as well, but it was a competitive three-set match. This time, they forced the match into five sets and kept each of them very close.

“That crosstown rivalry just brings out the best in us I guess,” Lafayette coach Clint Jordan said. “I hope we can bottle this up moving forward. Tonight we showed that we can play well for an entire night. We’ve struggled with that consistency, but there has been a few times like tonight when we’ve showed that against very good teams.”