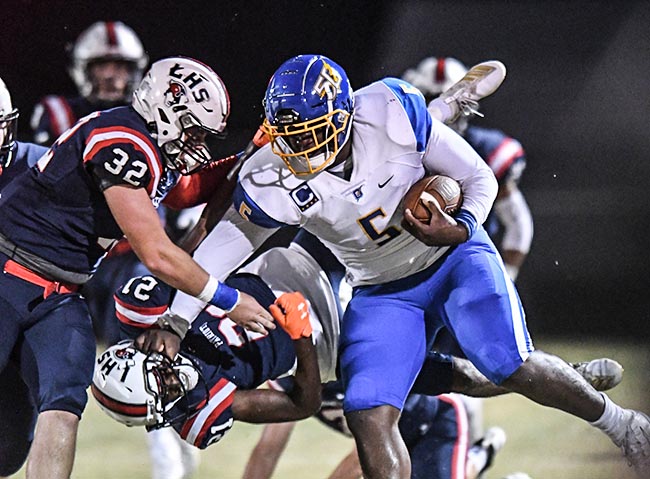 OLIVE BRANCH – Chris Cutcliffe had to look into his bag of tricks Thursday night on the road.

Trailing 3-0 at halftime and needing a spark, Cutcliffe pulled from Sean Payton and New Orleans Saints, stealing a play right out of Super Bowl XLIV – a surprise onside kick to start the half.

Oxford kicker Jack Tannehill stepped up and nailed it, except he hardly kicked it at all. A ball moving just 10 yards was recovered by the Chargers, changing the entire dynamic of the football game. After scoring none and trailing by three at the half, Oxford rallied back to beat Lewisburg in an early Thursday night game, winning 21-3 behind 21 unanswered second-half points.

“It’s something we worked on this week and we thought we could get. Obviously we thought we needed some momentum to start the second half, with all the turnovers in the first half. Thankfully it worked out for us,” Cutcliffe said. “I thought it was important. It was good to show the guys, to get them to respond the right way to a tough first half offensively.

Oxford played just about the worst first half of football they could on the road Thursday night in Lewisburg. It wasn’t a pretty one for the Chargers, but end the end, the outcome is all that matters.

The Chargers’ only consistent form of first half offense against the Patriots came in the form of John Meagher scrambling on non-designed quarterback runs. The problem is, Meagher himself committed three turnovers in the half.

Early in the second quarter, Oxford’s first time in Patriot territory, Meagher fumbled on a 3rd and two. The next drive, Meagher there an interception on a short drag route thrown behind the receiver. Driving at the end of the half, he threw his second interception with 51.6-seconds to play, this one a misjudged redzone fade towards JJ Pegues.

Things still didn’t come easily for Oxford following the onside kick to start the second half. Just three plays later, Oxford found themselves in a 4th and 4 in Patriot territory. They brought in the heavy ‘bowling ball’ packing, and JJ Pegues went 10 yards around the right side, bulldozing through two Lewisburg defenders for the first down. KJ Wadley would punch it in for the Chargers a few plays later for the first Oxford lead of the night.

Despite the turnaround, it wasn’t a perfect half of football for Oxford in the second half. They would fumble again, this one on a high snap and fumble exchange early in the third quarter. Thankfully for the Chargers, the defense held strong, forcing a missed redzone field goal.

For a lot of the night, this was the theme – the Oxford defense played really well. Lewisburg got into the redzone three times and came away with just three points.

In the end, Oxford left Olive Branch with a win, despite the poor start. As their coach says, it’s a testament to the team’s mental toughness

“We talked back in August. We have some core values that we use to define our program and one of them toughness,” Cutcliffe said. “We talk about the definition. For us, toughness is how you respond. No need to scream and holler and fuss. I told them we had a chance to respond.”

Following the win, Oxford returns home after a long week at 5-1. They’ll get the 3-2 Desoto Central Jaguars at Bobby Holcomb Field next Friday night.