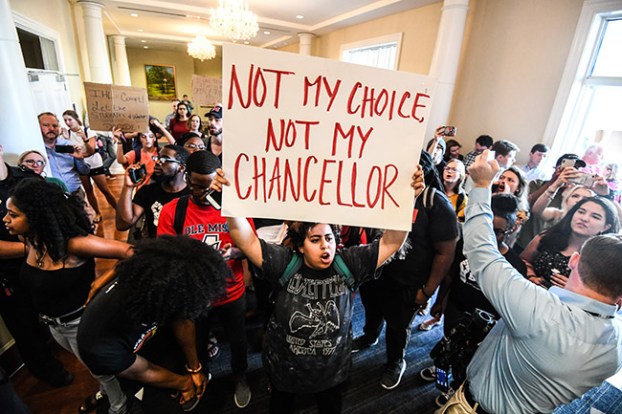 Protesters chant following the cancellation of the announcement of Glenn Boyce as the new chancellor of the University of Mississippi, in Oxford, Miss. on Friday, October 4, 2019. The announcement was cancelleded due to protests. (Bruce Newman, Oxford Eagle via AP)

After a press conference ended before it could begin, the State Institutions of Higher Learning still made the announcement they came to Oxford to make.

Dr. Glenn Boyce is the next chancellor of the University of Mississippi. The announcement, which came via an emailed press release, did not come without controversy over a 19-hour period after reports of his hiring began spreading across social media on Thursday evening.

“Dr. Boyce has deep ties to the University of Mississippi and within our state,” Dr. Alfred Rankins, Jr., commissioner of higher education said in a statement. “He has a passion for the university, its students, faculty and administration.”

Boyce, who was hired by the University of Mississippi Foundation to serve as a consultant during Ole Miss’s search for its next chancellor, was unanimously selected by the IHL’s Board of Trustees. The hire was made on the second day of the first round of interviews being conducted by the IHL in Jackson, which was a process laid out by the IHL when the search began earlier this year.

None of that happened, as Boyce, who was the Commissioner of Higher Education himself from 2015 to February 2018, was hired during the first step of an announced month-long process.

“I am honored to be given this opportunity by the Board of Trustees and the Ole Miss family” Boyce said in a statement. “As an alumnus, I am deeply appreciative to the University for providing me the leadership skills and intellectual knowledge necessary for advancing my career.”

Before serving as commissioner, Boyce was the associate commissioner for academic and student affairs for IHL. He joined the IHL after serving as president of Holmes Community College for over nine years.

There was a press conference scheduled to take place at The Inn at Ole Miss on Friday to announce Boyce’s hiring. Student protesters who were in the ballroom, did not cease chanting prior to the press conference, nor did they cease when IHL board member Ford Dye attempted to start proceedings. Ray Hawkins, the University Police chief, announced the press conference would not be taking place on Friday.

As news broke of the Institutions of Higher Learning’s decision to expedite the selection process for Ole Miss chancellor, one... read more