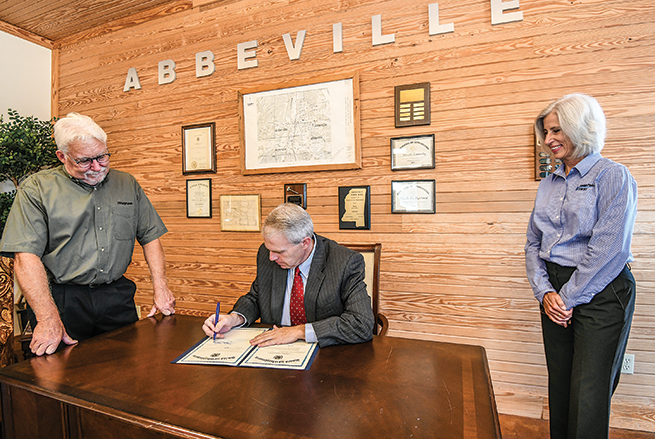 Once Mississippi Northern District Public Service Commissioner Brandon Presley put his pen down, Abbeville officially became the latest rural Mississippi town to receive a natural gas expansion. Presley, along with Abbeville mayor Scott Fricker and members of CenterPoint Energy Mississippi were in attendance for one of Abbeville’s most important days in its history.

The $1.2 million project will provide natural gas service to 90 customers in Abbeville, but also to the area between the hamlet and Oxford along the Highway 7 North corridor.

“Today is a great example of what a concerted effort to try and invest in rural Mississippi means,” Presley said. “Folks who live in Abbeville deserve the same quality of life as those who live in large, metropolitan areas, and I want to make sure we’re bringing them that quality of life by giving them the same choices for heating their home or powering their home as someone living in a bigger city does.”

Now that the order has been officially signed, CenterPoint will begin advertising for bids for the project, which is expected to begin around December. By connecting to an already existing infrastructure with Oxford’s gas line, the challenges were not as daunting for this project.

Even though the project is not scheduled to begin for at least a couple months, residents of Abbeville can begin the process of seeing what steps are needed to be done to procure natural gas for their home. Residents who are using propane will already have some of the required plumbing for natural gas. Residents using an electric service will require a different process.

“Besides the economic part of it for the people that live here, it’s just another added thing that we would have to offer,” Fricker said. “The county’s growing this way, I think. We’re in a good spot, surrounded by core property on the north part. Hopefully it will lead to some more businesses and some more growth in our community.”

CenterPoint will install 100 feet from the property line along the street at no cost to the customer. Any additional footage needed will cost $9 per foot. Customers will have the option of having a plumber install a gas line if their service line will be more than 100 feet if they choose to not pay CenterPoint the additional footage cost. All gas piping past the meter will be the customer’s responsibility, and CenterPoint will not make any repairs to piping past the meter.

Customers will have their yards dug up to install the gas lines, but CenterPoint will be responsible for making the yard look as close to what it did prior to construction.

Lafayette County District 1 supervisor Kevin Frye and District 3 supervisor David Rikard were also at the ceremony. Frye, who is running for Mississippi Senate’s District 9 seat, referenced the County’s plan to provide as much of the rural areas of Lafayette County utilities such as natural gas.

“One of our significant priorities is to expand natural gas to as many parts of the county as we can,” Frye said. “We’re going to continue to work, not just in this area, but throughout the county to bring this as many residents as we can reach. It’s exciting to see some things that we’re planning for actually happen.”

The process could take up to a minimum of six weeks before a resident is ready to convert to natural gas. Potential customers can call CenterPoint at 800-371-5417 for more information.