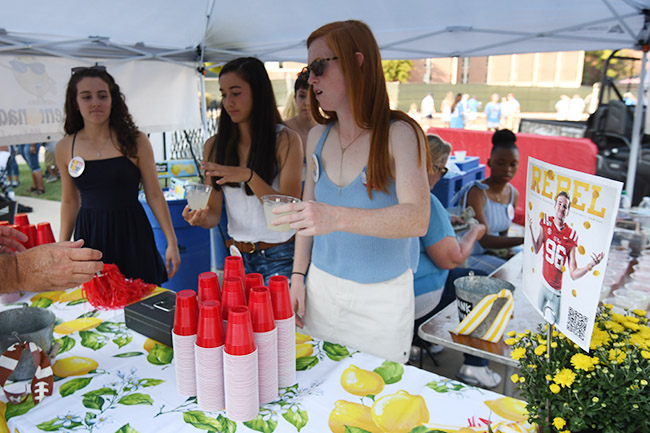 Mac Brown only sold lemonade from a street corner in Eden Prairie, Minn. for the past nine years. On Saturday, that all changed as the Ole Miss punter brought his Awesome Lemonade Stand to Oxford.

When Brown was in seventh grade, he and a group of neighborhood friends started selling lemonade to raise money for a childhood friend’s father, Michael Brandt, who had been diagnosed with ALS. The goal was $500 to help fund a fishing trip for the family, but when he shut down at the end of his first day, he had raised more than $2,000.

When Brown began the lemonade stand, he was selling it for 25 cents per cup and continues to keep the amount at a quarter. As of Saturday, that goal of $500 had exceeded $70,000 due to lemonade sales, but also due to the overwhelming amount of donations Brown has received over the years.

Brandt has since passed away, but Brown donates the money raised from the lemonade stand to ALS research.

“It’s a big deal. It’s really cool,” Brown said. “We’re hoping for Oxford to step up and come with some big donations.”

With the help of his family and the Ole Miss Student-Athlete Advisory Committee (SAAC), Brown set up his Awesome Lemonade Stand in the plaza between Vaught-Hemingway Stadium and The Pavilion.

Brown is a member of the SAAC, representing the football team, and the organization expressed interest in bringing the lemonade stand to Oxford and Ole Miss.

Ever since word of Brown’s lemonade stand began spreading to places outside of Minnesota, people began sending in donations from across the country. It even made his family members, such as his sister Bailey, take more notice.

“I’m super-impressed with the culture here at Ole Miss and especially the SAAC group,” Bailey said. “It means everything. …The obvious passions of Mac that people know him for are his athleticism and he’s a really fun guy to be around. But what people don’t see necessarily all the time is that he has the biggest heart of anyone I know. What fills his cup at the end of the day is giving back to others.”

The stand opened up three hours before Ole Miss and Vanderbilt kicked off just a few hundred feet away inside Vaught-Hemingway. It stayed open until the Coca-Cola Rebel Fan Fest closed down ahead of kickoff.

Members of SAAC manned the stand, while Brown’s sister and parents assisted. They saw a steady flow throughout the afternoon. By the end of the day, Brown’s Awesome Lemonade Stand raised $4,500.

“I wouldn’t really have guessed it. It’s cool to see the whole athletic community come around it,” Brown said. “That’s a big deal and people want to made a difference in the community and just step up. That’s pretty cool that everybody wants to help now.”

Water Valley bounces back with region-opening win over Byhalia