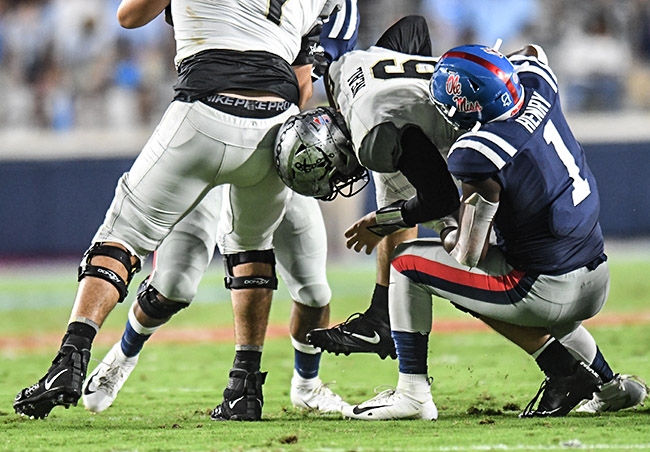 Ole Miss’s defense is sick of hearing about how young the offense is – they wanted in on their share of the true freshman action.

“We tell those guys to be ready when their time comes. They stepped in there and they made some plays,” head coach Matt Luke said. “There’s a lot of youth and there’s some mistakes out there. But you see them flying around and making plays. You see the speed that they play with.”

Rebel defensive coordinator Mike MacIntyre joked earlier this week that if you were Vanderbilt, wouldn’t you throw on this Ole Miss defense? After giving up over 400 yards passing at Alabama last week, the Ole Miss defense needed a spark in the secondary – they found it in the young freshmen.

Against Vanderbilt – which, it’s worth noting, is a considerably worse offensive team than Alabama – Ole Miss allowed just 202 yards passing. Starting quarterback Riley Neal went just 18 for 30 against this Ole Miss defense, totaling just 140 yards through the air… that’s just 4.67 yards per attempt through the air.

Truly, it’s an incredible improvement for a team that, to this point, had not slowed anyone down passing the football.

“It’s confidence. Their confidence is getting really high,” junior defensive back Jaylon Jones said. “Their swagger is starting to show, and you can see they’re not thinking as much anymore. We tell them all the time it’s just football.”

But it wasn’t just the young guns on the defensive end. Ole Miss also got really good games in the secondary from Myles Hartsfield and Jalen Jones, and some unbelievable games from the inside linebacking group.

Lakia Henry recorded a preposterous 15 tackles against Vandy and sacked Neal once. Jacquez Jones added nine tackles of his own. This inside linebackers group, playing without MoMo Sanogo who is out with a broken ankle, needed some time to adjust. But over the past two weeks, they’ve really taken to form.

“Lakia is starting to become more and more of a leader,” Luke said. “He’s starting to grow into that leadership role, being that linebacker that makes the checks and the calls. He made several big plays tonight in the run game and also some stuff that’s not going to show up.”

After a disastrous week on third down in Alabama, Ole Miss emphasized it all throughout practice this week. Against Vanderbilt on Saturday night, the Commodores converted on just two of 17 third-down attempts.

It wasn’t a surprise that everything that happened a week ago in Tuscaloosa had to be taken with a grain of salt. Alabama, especially at home, is simply a different beast. But to see the Ole Miss defense bounce back, and do so in a different way and against an SEC opponent, was incredibly encouraging.