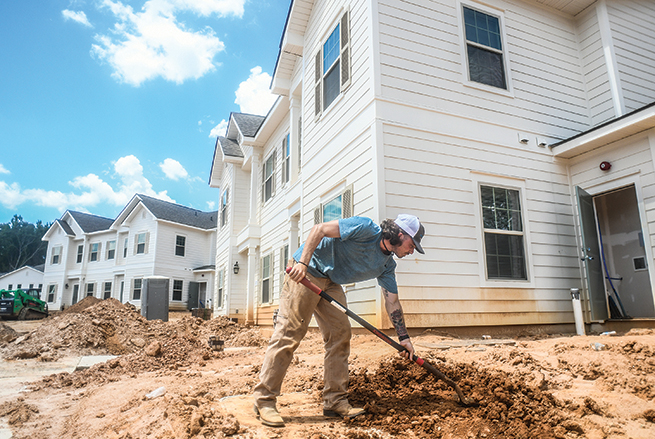 Elijah Jumper, an employee of National On Demand, works on the Belle Rivers project that is under construction in Oxford, Miss. on August 15, 2019. Developer Stewart Rutledge announced during Tuesday’s Board of Aldermen meeting that the Belle Rivers development at University Avenue and Slack Road is at 100 percent capacity. (Bruce Newman, Oxford Eagle)

The City of Oxford approved two incentive requests towards improvements for the Belle Rivers and Eastover affordable housing developments.

The requests were made by developer Stewart Rutledge during a recessed meeting of the Board of Aldermen on Aug. 28 and voted on during the board’s regular meeting on Oct. 1.

Rutledge’s requests were what he referred to as the second step in the developments of Belle Rivers and Eastover, and both classified as infrastructure needs.

Bell Rivers’ infrastructure request was to replace an outdated lift station located on Slack Road, which will cost $40,000. Rutledge’s requests for Eastover were for a water connection from F.D. “Buddy” East Parkway North to the development ($77,000) and an off-site sewer service from the Brittany Woods subdivision to Eastover ($110,000).

All the infrastructure requests are due to insufficient existing capacity, are off-site, will be wholly owned by the City and will serve the Riverside and Brittany Woods areas.

Prior to the vote on Rutledge’s requests, he provided updates on the two developments and the affordable housing initiative in Oxford.

Since the closure of the Riverside Apartments, every resident has been housed in one of the affordable housing communities and an additional 217 affordable housing units are in the works. The 96 units at Eastover and Belle Rivers have been considered case studies.

“The City of Oxford and Mayor (Robyn) Tannehill committed three years ago to doing what it takes to make affordable housing happen in Oxford,” Rutledge said. “That is a very tall order and I wasn’t certain it could happen. Tonight we saw the City go from talking about affordable housing, to making meaningful and substantial investments in affordable housing. That is a rare step.”

Rutledge informed the Board that he would not be making any further requests for either development beyond the those voted on during the Oct. 1 meeting. In September, Belle Rivers began accepting applications and had eight units constructed and ready to move in.