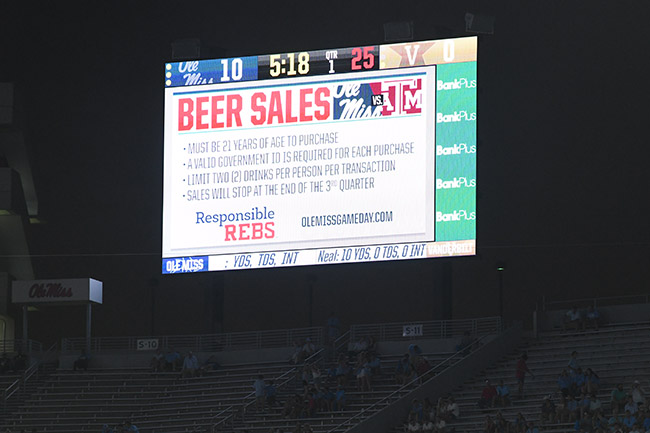 Ole Miss will be the second Mississippi university to offer beer during football games come Oct. 19.

The Rebels’ home game against Texas A&M will be the first game in which beers will be served inside Vaught-Hemingway Stadium. Beer will continue to be sold the remaining home games against New Mexico State (Nov. 9) and LSU (Nov. 16).

On Monday, the list of beers and how much they will cost was released by the athletic department. There will be six beers, as well as Henry’s Hard Sparkling Water, available for fans over age 21 to purchase.

The full selection can be found below:

There will be one Mississippi-made beer available out of the six. Suzy B is an American blond ale made by Hattiesburg’s Southern Prohibition Brewery.

During Saturday’s game against Vanderbilt, there were rules posted on the video boards during timeouts and stoppage of play. Customers must be 21 years of age or older to purchase. A valid government identification is required for each purchase. There will be a limit of two drinks per person, per transaction and sales will stop at the end of the third quarter of each game.