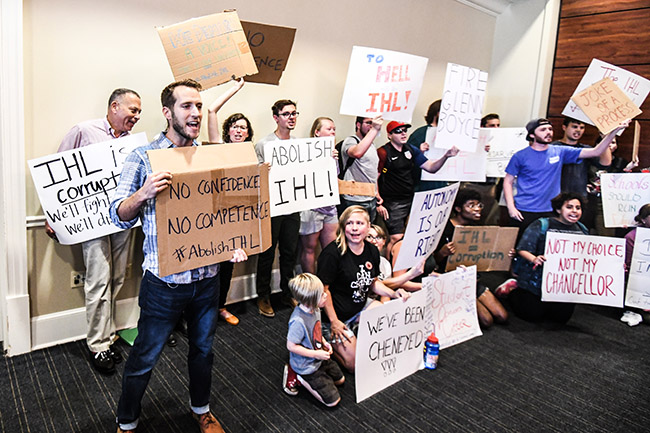 Protestors interrupt the planned announcement of Glenn Boyce as the new chancellor of the University of Mississippi, in Oxford, Miss. on Friday, October 4, 2019. The announcement was cancelled due to protests. (Bruce Newman, Oxford Eagle via AP)

The University of Mississippi’s Faculty Senate and one of its campus groups continue to condemn and voice their displeasure over the hiring of Dr. Glenn Boyce as the school’s next chancellor.

Following a press conference that never happened on Friday afternoon inside the Inn at Ole Miss, the Students Against Social Injustice (SASI) released a statement regarding their protest that led to the cancellation of Boyce’s formal introduction. Prior to the noon press conference, students with UM Solidarity and SASI made signs in The Grove and then filed into the ballroom at Inn. Around 20 protesters were allowed into the ball room while the other estimated 180 protesters, according to SASI, stayed outside in the hallway. The ballroom was cordoned off to accommodate half its usual capacity for the press conference.

Two protesters were forcibly removed by University police chief Ray Hawkins and another UPD officer before Hawkins announced the press conference would not take place.

The protest, according to a statement released by SASI on Friday afternoon, was in against what the organization saw as “excessive oversight and the overstepping of political boundaries by the IHL with their local involvement at local universities, including the University of Mississippi.”

“IHL doesn’t speak for students or workers of the University of Mississippi,” Jared Foster, a representative of SASI said in a statement. “The appointment of Glenn Boyce is testament to that. We should let students and workers choose.”

Also on Friday, the University’s Faculty Senate released a statement condemning the hiring of Boyce as well as the events that transpired that day.

The list of items in their statement the Senate condemned:

The hiring of Boyce occurred on the second two days set aside for first round interviews with eight candidates. A list of candidates was revealed on the Monday prior in a report from Mississippi Today. During a conference call on Friday with IHL Board member Ford Dye and Boyce, Dye denied any list was put out by the Board and that he would not discuss a “confidential list.”

“We stand committed to The University of Mississippi and are deeply concerned this process has caused immeasurable harm to our institution and its reputation,” The Faculty Senate’s statement read.

Boyce is anticipated to begin his duties sometime this week.

Who is Glenn Boyce? What we know about IHL’s pick…