Re-evaluating the Ole Miss bowl odds: What needs to happen? 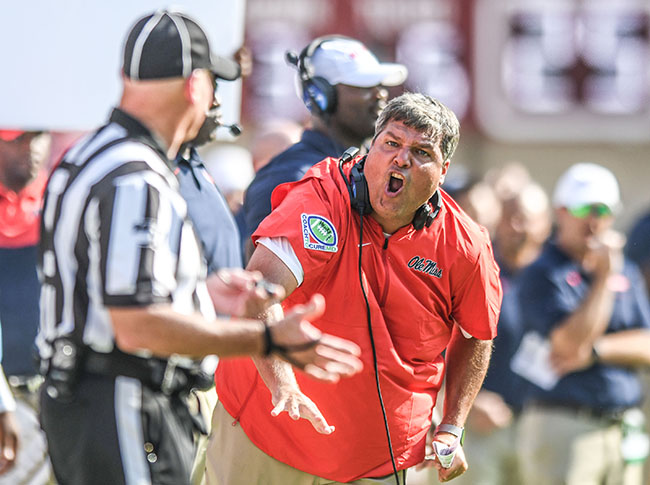 Head coach Matt Luke was asked Monday what the 2019 Ole Miss team needs to do over the course of the remainder of the season for this year to be a success.

His answer was sort of translucent coach speak, but at the same time there was a moment of true clarity.

“As far as successes, it’s week-to-week getting better. That’s my number one goal,” Luke said. “But obviously, the elephant in the room is going to a bowl game. Getting this program back to the postseason is a huge goal, but right now we’re focused on week-to-week.”

He’s not wrong. With a program that hasn’t been to a bowl since the 2015 Sugar Bowl, and one that is newly freed from NCAA sanctions, getting to a bowl game again has to be the number one goal. Earlier this year, the EAGLE wrote a similar version of this story. Then, in the preseason, it was evaluating what Ole Miss would need to do to get to that six-win plateau. Now at 3-3, the road to those six wins look a little more difficult, but it’s not impossible. And with the SEC shaping out, we have a little more clarity on where each program is.

The Rebels have six games left on their schedule, of which they need to win half. The remaining games are at Missouri, No. 24 Texas A&M, at No. 12 Auburn, New Mexico State, No. 5 LSU and at Mississippi State.

The proverbial “must-win” games are kind of a silly topic, yet at the same time this weekend’s game at Missouri seems like a must-win.

Realistically, let’s say Ole Miss has no shot at beating Auburn on the road or LSU. With that in mind, they have to win three of the four other remaining games, including this weekend at Mizzou. Now it looks like Kelly Bryant, Missouri’s quarterback who was banged up a week ago, will likely play against Ole Miss. The Rebels have to take advantage of getting a less-than-100-percent Bryant.

At 0-6 to date, New Mexico State is statistically just one of the worst teams in FBS football – Ole Miss will win that one and do so handily. Texas A&M, who the EAGLE picked preseason to finish third in the west, is simply not the team many thought they’d be. Jimbo Fisher and Kellen Mond haven’t had that second-year bump, and frankly, the team is only ranked as an homage to their preseason hype. That game, which looked like one of the tougher on the Ole Miss schedule to start the year, is suddenly winnable.

Then there’s the Egg Bowl. There’s a very realistic possibility that Ole Miss will travel to Starkville on Nov. 28 with their bowl eligibility on the line, having beaten New Mexico State and one other game. Coming off an 8-5 season that included a trip to the Outback Bowl, Mississippi State has been simply uninspiring so far this season. The Bulldogs (3-2) have one SEC win to date, Kentucky, but it came sandwiched between losses to 3-2 Kansas State and an embarrassing blowout at Auburn. The defense is really where State has regressed – the unit that ranked No. 4 nationally in total defense a year ago now ranks No. 69 nationally. And like Ole Miss, they haven’t totally settled at the quarterback spot between Tommy Stevens and Garrett Shrader.

Ole Miss might not waltz into Starkville and beat the Bulldogs with their bowl eligibility on the line. But, it’s doubtful the Egg Bowl ends in the same embarrassing fashion as a last year. Regardless, Ole Miss’s bowl hopes are still alive and relatively reasonable. Technically, they don’t have to beat Missouri this weekend, but it would go a long way in making that postseason goal seem realistic.