Lafayette, Randy Anderson run down Center Hill for win No. 5 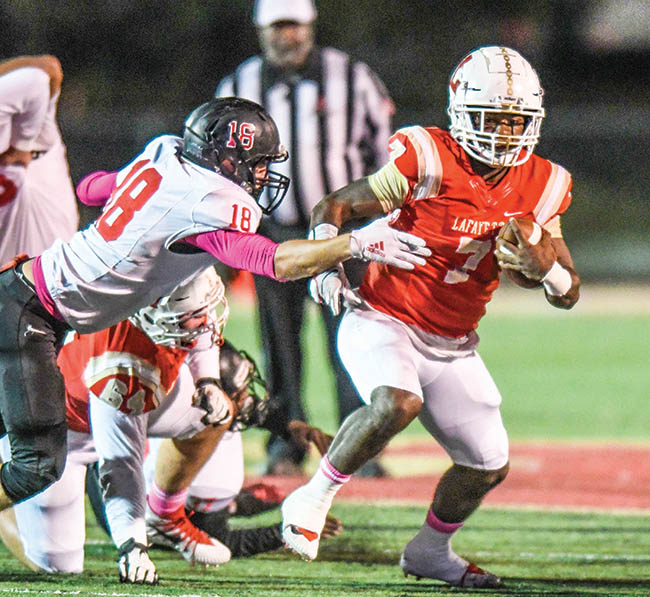 The pace was slow, the was game fast and Randy Anderson was the fastest man on the field.

Lafayette (5-2) made quick work of Center Hill (4-4) on Friday night, putting the Mustangs away in just over two hours of real time with a 24-7 win.

Receiving the opening kickoff, Lafayette’s opening drive of the game went 7 minuets and 57 seconds. Commodore quarterback Randy Anderson capped the opening drive with a six-yard touchdown, one of just five total possessions in the entire first half of play. It was one of only three scores on the ground by Anderson on the night.

As methodical and controlling as the Lafayette offense was early, the most critical play of the first half for the Commodores came on the defensive side of the football. Having allowed Center Hill to convert an earlier 4th and 7, Lafayette stopped the Mustangs on a 4th and 5 from their own seven-yard line. The Mustangs needed seven yards to tie the game or five yards to pick up a first down. Lafayette held them to just five yards.

“That play was huge for our defense,” head coach Michael Fair said. “You don’t see this (triple option) offense. We see it maybe once a year. So, from the time the kids come down to the facility, they’ve been entrenched in it all week. There’s always wrinkles that they throw in each week and it’s a headache to try to defend… that stand was big for us.”

Anderson’s second score came after another long, time-consuming drive in the third quarter, putting Lafayette up 17-0. Center Hill would not get on the scoreboard until the third quarter, a long 72-yard drive of their own to cut the lead to 17-7. Just when the Mustangs finally put the game into striking distance, Lafayette put the ball back in Anderson’s hand. Just four minutes of game time after the first Center Hill points, it was Anderson notching his third touchdown of the night. This one, a 30-yard scamper down the left sideline.

As good as Anderson has been all year, this was by far his best night. A great rushing threat from the quarterback spot, Anderson carried 27 times for a career high 236 yards and three touchdowns. It was also his most efficient night as a thrower, completing five of six passes for 34 yards.

One of the only area schools to not move their game to Thursday evening, Lafayette played Friday night in brisk 50 degree-weather with a light drizzle. A former college offensive lineman, Fair smiled when asked about playing in the rain, something that clearly benefits the Commodores’ style of grind-it-out football.

“It suits us. It’s a mindset and we practice in it,” Fair said. “We practice it and we workout in it for times like this. When there’s an opportunity to play in this weather, we never miss it.”

With the win, Lafayette advances to 5-2 on the year and 2-1 within their region. Their homestand continues next week, a game next Friday against 1-7 Saltillo.