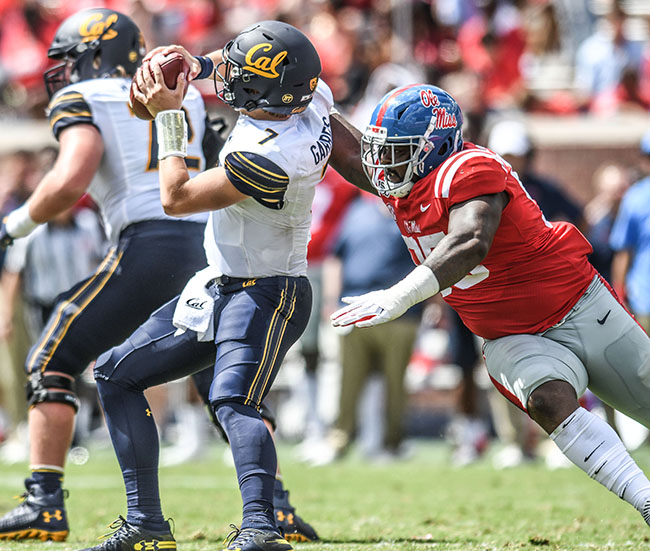 Nose tackles don’t get a lot of love.

They do the dirty work. It’s certainly not a sexy position, one where the job is often just to swallow up blockers to let others on the defense get to the ball carrier. Yet last week against Vanderbilt, Ole Miss senior Benito Jones was the most dominant wrecking force on the defensive front.

Jones is in the middle of the best stretch of his Ole Miss career. Last week, he made 2.5 tackles for loss and sacked Vanderbilt once. His quick hands and simple power were too much for the Vandy center. But it’s not just last week. Against Alabama, the nation’s No. 1 team, Jones had two more tackles for loss and two more sacks.

Benito Jones (95) was legitimately unblockable for #OleMiss on Saturday. Set the tone for that defensive front early.

Great use of the quick hands in the pass rush and pure physicality on the run stuff from these three plays pic.twitter.com/BoynOkHCrx

In only six games played this season, he’s already tied his career best in sacks and is 1.5 tackles for loss away from doing the same.

For such a young Ole Miss team in 2019, Jones is one of the few seniors who’s seen it all. A five-star recruit, he was part of the same 2016 recruiting class that contained Greg Little, Shea Patterson, A.J. Brown and D.K. Metcalf. Through the highs and the lows of NCAA sanctions, Jones has been in Oxford grinding and doing the dirty work on the interior of the defensive line. For head coach Matt Luke, there’s a special place in his heart for those guys.

“The seniors, all of them, mean an awful lot. They’ve all been through a bunch,” Luke said. “Anytime I get down and have a tough day, you think of those guys and that’s what keeps you going. They mean a lot to the program.”

This week, Jones has a little tougher of a task – Missouri quarterback Kelly Bryant, who sometimes seems allergic to staying in the pocket. Bryant loves to use his legs and wants to get outside the pocket to make some throws and get into space to run the ball himself.

That’s a little bit bigger of a challenge, especially for a 330-pound nose tackle who gets most of his penetration right up the middle.

“It’s kind of hard for a big guy like me to run behind a fast quarterback like him,” Jones said. “You have to make him throw the ball. You don’t want him to beat you with his legs. That’ll cause you to lose a lot of games if you can’t control the quarterback.”

Jones says the defense is embracing the young influx of talent. Last week, two true freshman defensive backs got starts on the defense. He says the whole room likes the sentiment – it’s all about who’s playing best as to who gets on the field. One thing we know for sure is that we’ll be seeing a lot of the senior nose tackle on the field Saturday in Columbia.