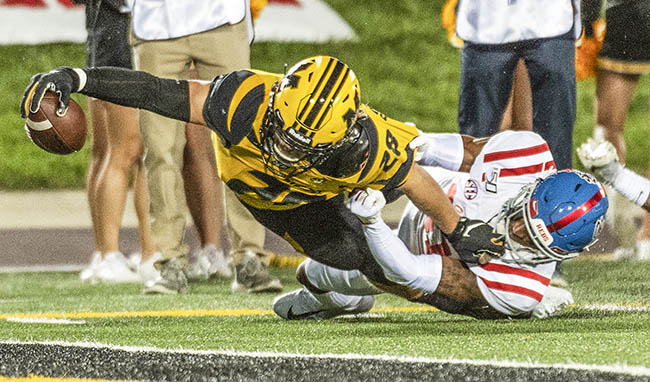 Missouri running back Dawson Downing reaches the ball across the goal line to score a touchdown against Ole MIss defensive back Jaylon Jones during the third quarter on Saturday, October 12, 2019, in Columbia, Mo. (L.G. Patterson, AP)

COLUMBIA, Mo. – Ole Miss may have scored first Saturday night in Missouri, but the Tigers controlled Ole Miss on both sides of the ball for much of the evening.

In front of a sold-out homecoming crowd at Missouri, Ole Miss dropped their first game since 2006 in Columbia 38-27.

Things looked good for Ole Miss early. An opening three-and-out was followed up by the Tigers muffing a punt. Six plays later, Scottie Phillips was into the end zone for a 21-yard touchdown reception and the Rebels held a 7-0 lead. Then things stuttered for the Ole Miss offense.

Following the early touchdown, the next three Rebel drives read as follows: punt, fumble, punt. The lackluster offense, much of which had to do with Ole Miss failing to move the ball through the air with John Rhys Plumlee at quarterback, led Rich Rodriguez to make a quarterback change late in the opening half.

Matt Corral came into lead what was potentially the game-defining drive at the end of the first half. Marching quickly down the field behind the strength of Corral’s arm, Ole Miss found themselves with a fourth and one from the Mizzou one-yard line and just eight seconds remaining in the half. Needing just one yard to give Ole Miss a lead at halftime, Snoop Connor came up just inches short.

“We though about (using Plumlee),” Luke said. “But we wanted to give the ball to Snoop and let him pound it in. That’s been his strength. So to try and find a way to go and get a few inches there right before the half, I would call that again.”

The second half would be defined by Ole Miss’s fluctuations between Corral and Plumlee at quarterback and the Rebels’ inability to slow down the Tigers rushing attack. Two different Missouri running backs broke 40 or more-yard touchdown runs in the third quarter alone. As a whole, the Missouri offense was much more explosive in the half. They accumulated 351 yards of offense in the second half. In the third quarter alone, Missouri’s 271 yards of offense was more than Ole Miss allowed all of last week’s game against Vanderbilt.

Ole Miss’s two-quarterback fluctuation produced second half points at times, but also failed to create much of a rhythm at others. Plumlee’s 40 yard touchdown in the fourth quarter cut the Tiger lead to 38-27, but it would be the final score of the football game.

A defensive issue that was prevalent much of last year came back to haunt Ole Miss quite a bit on the road Saturday – the ability to tackle. Ole Miss’s defense has been much better in this regard under new defensive coordinator Mike MacIntyre, but the use was prevalent again against Missouri.

One of just a few bright spots for Ole Miss in the game was the play of Elijah Moore. The sophomore slot receiver showed chemistry with both Plumlee and Corral, going over 100 yards receiving for the third time in his career and scoring a third quarter touchdown. Sam Williams also recorded both a sack and an interception in the game to accompany three tackles.

“They played hard, but we have to execute more,” Williams said. “They said it was going to be a street fight, and it was. But we beat ourselves, this was on us… we didn’t execute how we were taught to execute.”

Both Jacquez Jones and Tariqious Tisdale were ejected in the second half for targeting and will therefore have to miss the first half of play next week.