Rodriguez, Ole Miss working out the quirks of a two-quarterback system 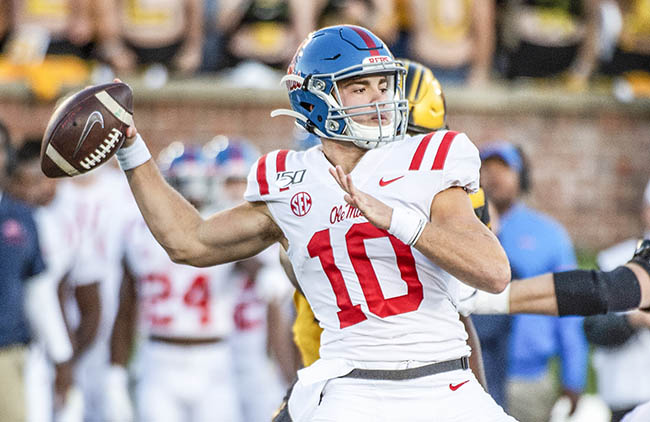 COLUMBIA, MO. – For the first time since late in the second half against California, Matt Corral took the field as the Ole Miss quarterback Saturday against Missouri.

Leading a long, quick and efficient drive late in the first half, Corral’s first appearance in two weeks may unfortunately be defined by the one play at the very end.

With a fourth and one on the Missouri one-yard line, down 12-7, it was Matt Corral in the game at quarterback. He led the 13-play, 74-yard drive to get Ole Miss to that point, and he was the guy behind center when the ball was snapped. Unfortunately for the Rebels, running back Snoop Connor was stuffed at the goal line.

In the post-game press conference, no one questioned the decision to go for it on fourth down. On the road, needing just three feet to take a lead into half, the Rebels were always going to go for it. Instead, the questions centered around who was in at quarterback for the play. Both Matt Luke and Rich Rodriguez said they thought about going with Joh Rhys Plumlee (who started the game) on that play, but they just thought Connor gave them the best look.

“We’re just trying to find ways to win football games,” Luke said. “I’m really pleased with those guys being unselfish, cheering for each other and rooting for each other. I feel like we had a good rhythm going using both of them and using their strengths.”

Origins of the quarterback questions are simple to anyone watching the first half. Plumlee is the better runner, providing a unique threat from behind center that many teams haven’t seen. Corral is simply a better thrower of the football, as is evidenced by game tapes and statements from coaching staff.

However, there may be ways to use what both do best to Ole Miss’s advantage. That’s what this coaching staff is still working to figure out right now.

“It’s based on what plays we’re going to call. That probably determines most of it,” Rodriguez said. “It might be unconventional, but it’s how we do it in practice. It’s how I’ve done it in the past and I think these kids handled it pretty well… they competed and it’s unique to use quarterbacks like that. But those guys knew going it that’s probably what we were going to do and we tried it.”

It’s a dynamic that Ole Miss and Rodriguez are still struggling to fully understand. Corral left that Cal game with a rib injury, something that held him out of the past two weeks of play. Plumlee was good enough in the last two weeks to earn his third straight start, even though Corral is now healthy. He lead the Rebels to their first quarter touchdown, one aided by a Mizzou fumble, yet none of the other first half drives he led went more that 45 yards and two went for three and outs.

In the second half, it was Corral starting at quarterback, but both quarterbacks operating behind center. In fact, during the fourth quarter, both saw time on the field during the same drives. Sometimes they were legitimately alternating snaps.

“They were adjusting based on who was playing quarterback. So to create confusion, we both went in and both played,” Plumlee said. “We’re competitors so we always want to be on the field but we want what’s best for the team… When we’re doing well, I think it helps both of us do well. I don’t think it’s a singular thing with rhythm, it’s when the team is doing well, everyone feeds off that.”

In the end, the passing numbers were close to identical. Plumlee three for 103 yards and two scores. Corral threw for 133 yards. The difference was certainly the rushing numbers, where for the third straight game, Plumlee rushed for over 100 yards.

Where will Ole Miss go from here? Who knows. They’ve made it clear over the last two weeks that they’re not going to disclose their plans to anyone outside the program. They don’t have to do so and it doesn’t benefit them to do so. But if Saturday in Missouri is any indication, they’re going to use both Plumlee and Corral. The question is, how long will it take them to figure out the quirks and appropriate situations to use both?