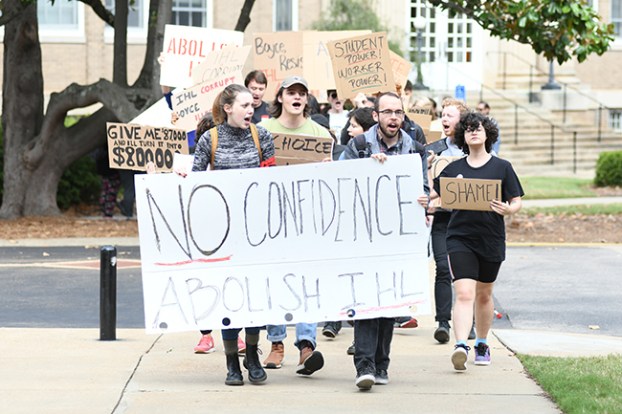 Approximately 50 people called for the resignation of new University of Mississippi Chancellor Glenn Boyce and the abolition of the IHL during a protest on campus, in Oxford, Miss. on Monday, October 14, 2019. Bruce Newman, Oxford Eagle via AP)

A group of students, workers, faculty, alumni and local stakeholders have come together to create the Abolish IHL Coalition, and on Monday they made their presence known.

The group, which is against the Institutions of Higher Learning’s Board of Trustees’ hiring of Dr. Glenn Boyce as the University of Mississippi’s newest chancellor, held a march and protest demanding Boyce’s resignation.

A group of approximately 40 students and other members of the community assembled at the Grove’s Amphitheater stage to make signs. It was a very similar scene to what the UM Solidarity and Students against Social Injustice (SASI) groups did on Oct. 4 ahead of a press conference to announce Boyce’s hiring, which was then disrupted and called off due to safety concerns and protesters.

Cam Calisch, a member of SASI who organized the protest 10 days ago, was also helping organize Monday’s protest. Calisch was one of the two protesters who were forcibly removed from the Inn at Ole Miss ballroom ahead of Boyce’s press conference.

“At the beginning of the year, we looked at doing an Abolish IHL campaign, but there wasn’t enough collective conscious of what the IHL was and so we kind of just tabled it,” Calisch said. “When (Boyce’s hiring) happened, we just got into action.”

Around 12:30 p.m. the group began marching from the Grove to the Lyceum. A sheet was handed out prior to the march with 11 specific chants to be yelled, an abbreviated list of the Coalition’s demands and protest etiquette.

“IHL, What the Hell?” and “IHL Is Corrupt, We’ll Fight Back and We’ll Disrupt” were some of the chants echoing throughout the Grove and the Lyceum Circle.

Once the group arrived at the steps of the Lyceum, they were met with a group already assembled and joined in the chanting. A couple of people spoke during the protest, including Anne Twitty, who is an associate professor and chair of the undergraduate committee of the University’s history department.

Twitty protested the process in which Boyce was hired and that he was paid to in turn hire himself. Boyce and the IHL denied those allegations during a teleconference on Oct. 4, with Boyce stating “I did not hire myself.”

At the conclusion of the speakers, the group marched into the Lyceum, where they did a letter drop and issued their demands to the chancellor’s office. The letter was read with members of the group chanting the demands throughout.

The Coalition’s demands are:

The Coalition plans to continue meeting and organizing other efforts beyond protests, according to Calisch.