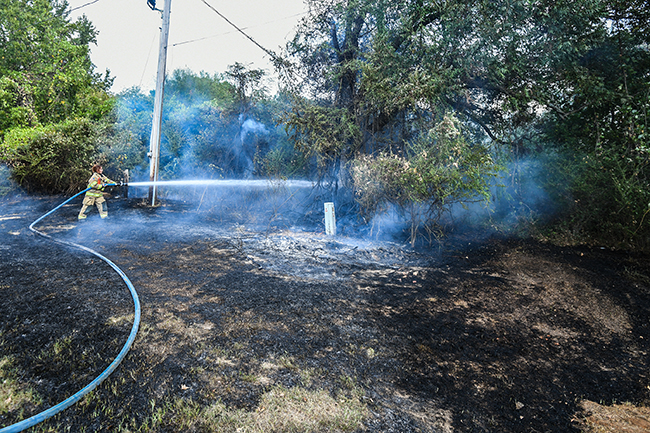 Oxford firefighter Rochelle Harwood extinguishes a grass fire on Highway 30 in Oxford, Miss. on Thursday, October 3, 2019. The state of Mississippi was put on a statewide burn ban on Wednesday by Governor Phil Bryant due to dry conditions. (Bruce Newman, Oxford Eagle)

After proclaiming a statewide burn ban in Mississippi two weeks ago, Governor Phil Bryant lifted the ban on Monday.

The request to lift the ban was made by the Mississippi Forestry Commission (MFC) after the state has received measurable amounts of rainfall since last weekend.

“Due to the amount of rainfall received in parts of the state over last week, MFC has seen decreased wildfire activity,” said Russell Bozeman, MFC state forester. “As a result of the rainfall and current weather forecast, the MFC requested the statewide burn ban be lifted.”

Even though the statewide burn ban has been lifted, the individual burn bans for each county are still in effect. The Board of Supervisors for each county will have the option to lift or extend their burn bans.

“I want to thank Gov. Bryant for initiating the statewide burn ban on October 2. It is impossible to quantify wildfire reduction numbers as a result of the burn ban, but I am confident it improved the situation,” Bozeman said. “I would also like to thank our wildland firefighters for their commitment and service to the state of Mississippi. They did an outstanding job during this dangerous time, working long hours to protect life, property and our state’s natural resources.”

The Forestry Commission encourages everyone to check on if their county still has a burn ban in effect. Violators of burn bans can be fined up to $500, as well as responsible for flame and smoke damage caused by a fire they set.

Mississippi Department of Archives and History to discuss UM…