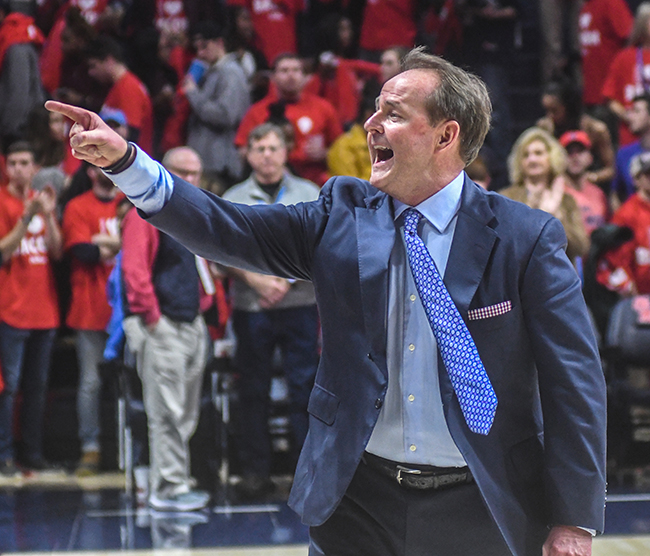 The Rebels’ first season under Kermit Davis was essentially a patchwork job.

The team from a year ago that won 20 games and made an NCAA Tournament berth had times where they didn’t physically resemble much of an SEC basketball team. This year’s team looks a little different.

“Compared to last year’s team – and I was very proud of that team – we’re deeper and more athletic. We’ll probably look more like an SEC team,” Davis said. “We are young in some areas but experienced in others. So we’re excited about the chances of getting going.”

The team held its first official fall practice on Sept. 30. This 2019-20 team will field just five members from the team that took the court last season. The team that last year didn’t have any reliable bodies off the bench, and often went stretches of games playing just seven players, will have a good 10 bodies or more that Davis is excited to play. Five of the new faces are either true or redshirt freshmen. Two more are JuCo transfers.

Everyone knows the veteran backcourt. Breein Tyree was a first team All-SEC player in his first year with Kermit Davis. Devontae Shuler took a massive step forward in his sophomore year, playing point guard for the first time and struggling most of the year with a bad foot. Those two will, again, be a big part of determining how high this team’s ceiling is. But having some reliable bodies to let them rest more, and not have to do it all, should theoretically make everyone better this season.

“They’re all really talented in their own way,” Tyree said. “They put in a lot of hard work. But they’re young faces, so they really don’t know what they don’t know yet… guys can be really good in practice. Guys can be really bad in practice. But when the game shows up it’s a whole different realm. We’ll have to see who’s a gamer, who steps up and makes a name for themselves in the SEC.”

Davis said he expects an even bigger jump from his veteran backcourt this year, not really in how many points they score, but in their leadership and how they share the ball. It’s just another way to integrate this new crop of Rebel players.

The most important new names to know come from a variety of backgrounds and positions. Freshman guard Austin Crowley and junior forward Khadim Sy could start for the Rebels. Crowley was the lone four-star recruit in the Rebel class, whereas Sy was one of the top-rated junior college big-man recruits. Another name Davis is excited about is redshirt freshman Carlos Curry. Curry’s length and 6-foot-11 frame to go along with his athleticism will simply provide an athletic interior presence the Rebels haven’t had since Davis took over the program.

Ole Miss fans are going to see these new kids on the court for the first time in live action, but Davis said he is most excited about what the fans don’t see. Where last year’s team hardly had 10 guys to reliably challenge each other in practices, this one has been competitive from the start.

“It is different. Competition, fans get to see it in games. Where coaches see it is in practice, because that’s where your team grows,” Davis said. “That competition, we use the analogy like football. Alabama probably has the best analogy of it, them or Clemson, where they have two or three guys at each spot. So you can imagine the competition, and everyone has to be on edge every single day. But not just to lose your spot, but the competition to get better.”

Despite being in the heart of football season, this basketball season is approaching faster than one might expect. The team began officially practicing last month and are just over three weeks out from their season opener. It might take some time for this new-look Rebel team to gel, but the ceiling is going to be higher for Ole Miss in 2019, in big part due to their newfound depth.

Jordan Ta’amu to play in XFL for St. Louis…