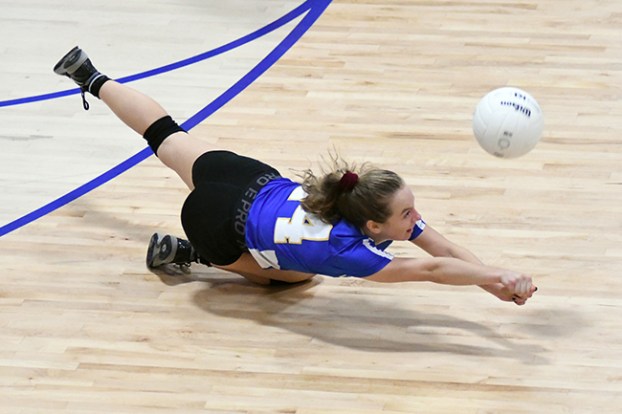 Oxford head coach Kacie Hengler has been preaching one main thing to her 2019 Lady Chargers volleyball team all season: growth.

This season featured that message. Growth from 2018, their first in 6A, growth individually and growth from a team laden with young talent. That season of growth ended on Thursday night, a 3-1 loss in the first round of the playoffs to Lewisburg at home.

“I’m really proud of them. It’s quite a feat to go as far, to win as many games as we did with as young of a team as we had,” Hengler said. “I hate it for my seniors. I know that feeling of being a senior and having a lot of underclassmen trying to play up with you. But I’m impressed. We have a bright future and I have nothing to be disappointed about.”

The back-and-forth first set seemed to be controlled by Lewisburg, but the Chargers were pesky. They kept hanging around and wouldn’t be put away. Lewisburg scored four straight after Oxford tied the set at 10. The Chargers kept tightening it back up, getting as close to 19-20 before the Patriots pulled away with a 25-21 opening set. The second set began similarly to how the first ended. Lewisburg jumped out to an early lead. Oxford never quit, but that lead slowly blossomed into the 25-17 set win for Lewisburg.

Serving first, the third set was the first time Oxford was able to gain a little momentum and jump on the Patriots. The Chargers scored the first four points of the set, in the process building up an early 12-5 lead leading to a Lewisburg timeout. Withstanding a comeback, the Chargers hung on to win their first set of 6A playoff volleyball 25-19. That Oxford momentum stalled into the fourth as Lewisburg ran away with a 25-14 set to end the night and advance.

“I knew we had to play our best game to beat them,” Hengler said. “We did at times. But it’s a lot for them to have that kind of consistency at that age to expect it for all four or five sets. I wish we wouldn’t have started out so slow, maybe we can do something different tonight. But I’m still really proud of them.”

At times early, the Lady Charger team looked like they were playing with more drive and energy they had all year. Unfortunately, they simply lacked the firepower of the Lewisburg team that won 26 regular season games en route to the Region 1-6A title.

As Hengler mentioned, it’s a really young Charger team. Freshman Brianna Lyons led the way on Thursday with 12 kills and 9 digs, while sophomore Ainsley Tacke added 16 kills of her own.

The season ended similarly as their first year playing 6A volleyball in 2018, a first round playoff exit, yet the team took a big step forward. Last year’s Lady Chargers went 15-18-1 before their playoff exit. This team made a seven-win improvement in year two, finishing the year 22-15-1 with the same playoff exit.

“Things were totally different from a year ago,” Hengler said. “The energy, enthusiasm and athleticism of 6A doesn’t really compare. Last year we had a ton of seniors but this year we don’t. And that just means I get to spend even longer with these girls. I’m excited.”