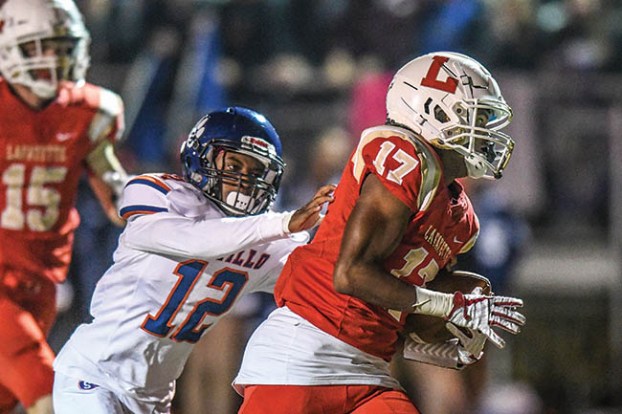 For them, the game really started in the second quarter, where they began a 12-minute onslaught in their 49-0 Homecoming win at William L. Buford Stadium.

After a scoreless first quarter, Lafayette and quarterback Randy Anderson commenced to put 42 points in the scoreboard in the second quarter. It was a near-perfect 12 minutes of football for the Commodores (6-2, 3-1 Region 1-5) in all three phases.

“We kind of sputtered around, and we had some big plays called back and it kind of took a little of the emotion out early,” Fair said. “I was really proud of how we came back and settled down. I thought that was what a mature football team does.”

With Tyrus Carmichael-Williams out for the third straight game due to a concussion, Anderson was under center all night and after a sloppy first quarter, which saw Lafayette rack up 25 penalty yards, Anderson settled in and accounted for four of the Commodores five offensive second-quarter touchdowns. The senior rushed for one touchdown and threw for three others.

The running attack was not all Anderson, however. The duo of Issac Vaughn and Trikyus Woodall rushed for a combined 130 yards and a touchdown on 10 carries. Kylen Vaughn had two catches for 87 yards and two touchdowns, while Brendan Toles had one reception for 15 yards and a score.

Anderson finished with 31 rushing yards and one touchdown on 10 carries, and completed 4 of 6 pass attempts for 105 yards and three touchdowns.

“In all three phases I thought we executed at a real high level (in the second quarter),” Fair said. “What I told our guys is that shows what we’re capable of. Some weapons, offensively. We’re starting to come together defensively, I think, and our front has been good all year, but our linebackers are playing better than they have been.”

Defensively, the Commodores executed all night and swarmed to the ball. They had four takeaways, with two of their three interceptions being returned for touchdowns. Tabias Brown and D’camron Lipsey each had a pick-six, with Brown’s coming in the second quarter and Lipsey’s in the final minutes of the game. It was also the first shutout of the season for the Commodores.

Lafayette returns to the road the next two weeks. Their first trip is to New Hope next week before going to Columbus on Nov. 1.

“Hopefully our non-district (schedule) prepared us for this,” Fair said. “We traveled to Cleveland in week one with a bunch of young kids and they’re not young kids anymore. We’re sitting here week nine and we should be grown enough to handle situations like this. We’re going to have to.”

Water Valley’s first two possessions ended in a punt and interception. The Blue Devils would score on five of their... read more