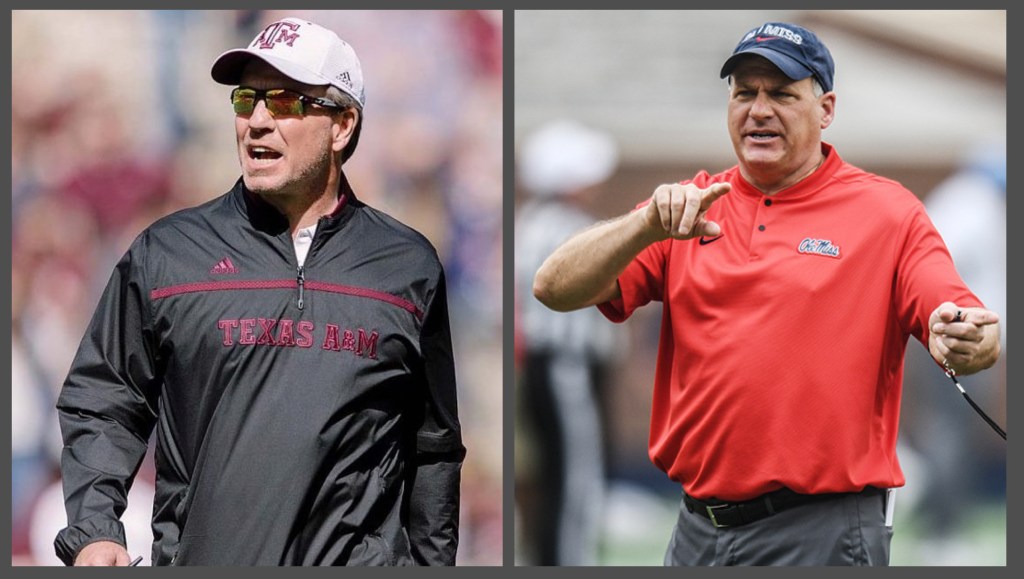 The rolling mountains of rural Appalachia perfectly represent a unique subsection of America that can be hard to describe to one who hasn’t stepped foot in it personally.

Similar to the Mississippi Delta, growing up in West Virginia is a different world. It binds people together and sticks with them well into their adult lives.

In many ways, this weekend’s game between Ole Miss and Texas A&M draws its roots from a place over 600 miles northeast of where Vaught-Hemingway Stadium sits today: small, coal mining communities in rural West Virginia, that became rare, short-lived hotbeds for today’s coaching minds.

Jimbo Fisher, the second-year head coach at Texas A&M, is from Clarksburg, W.Va. Rich Rodriguez, Ole Miss’s first-year offensive coordinator, is from Farmington, W.Va. Not playing in this game, obviously, but Alabama head coach Nick Saban is from Fairmont, W. Va. All three are separated by no more than 30 miles.

“We’re probably all three from 15 or 20 minutes away, these tiny little coal mining communities. Just speaking for us, football and athletics was a big deal,” Rodriguez said. “Growing up in coal mining communities, on Friday nights those coal miners go to football games and support it a lot. There wasn’t a whole lot else; a lot of hard working, blue collar people in the state of West Virginia and they love football.”

Saban is a little older than the other two, but all three are pretty close. Rodriguez and Fisher are 56 and 53 years old, respectively. Growing up, they played softball together. Despite overlapping some in grade school, the two actually never played against each other in high school football.

When Rodriguez was at working his first coaching job at Salem College (you guessed it – in West Virginia) in the 1980s, Fisher was playing quarterback on the team. When Rodriguez took over as the head coach of Glenville State (also in West Virginia) in 1990, Fisher was his first quarterbacks coach. It was a stint that lasted just three months or so, short enough that it doesn’t even appear on Fisher’s Wikipedia page. Fisher made only $1,500 those three months, something Rodriguez jokes “he makes in a minute now.”

“There’s certain places where, if you grew up there, it means you have an instant connection with someone just because they are from there, too,” Fisher told ESPN back in 2017. “West Virginia is one of those places.”

These guys just stick together. After stints at Tulane and Clemson following his Glenville State tenure, Rodriguez returned home to the University of West Virginia in 2001, where he coached the Mountaineers before moving on to Michigan in 2008.

For Fisher, he went on to connect with the third member of the trio. When Saban took the LSU head coaching job in 2000, Fisher was one of his first calls. Fisher coached quarterbacks and worked as the offensive coordinator under Saban for four years before the head man jumped to the NFL.

This weekend, when Fisher and Rodriguez meet under the lights, they’ll both bring a modern approach to the same blue-collar football they grew up with. Both the Ole Miss and Texas A&M offenses are built around that hard-nosed mentality of running the football. Yet, both have put a modern spin on the game, utilizing the quarterback run as a critical component of the offense.

Ole Miss will be using a unique, intentional two-quarterback approach. Texas A&M, with the loss of starting running back Jashaun Corbin, will be putting a big part of the rushing attack on quarterback Kellen Mond.

“They have several good receivers and Mond an experienced quarterback. He can really hurt you with his legs, but he can also throw it,” Ole Miss head coach Matt Luke said. “They have designed quarterback runs for him. It’s not just scrambles. It’s schemed up for him to run the football.”

The media picked Texas A&M to finish third in the SEC West this year, behind Alabama and LSU. They’ve certainly underwhelmed the preseason hype, entering Oxford at 3-3 and unranked for the first time this season.

Yet it’s still an Aggie team laden with talent and sporting one of the best defensive lines in the SEC, something that Rodriguez will have a challenge scheming against for an Ole Miss offense whose main goal is to be able to run the football efficiently. Sitting at 3-4, it’s a critical game for Ole Miss if they want to make a run at a bowl game.