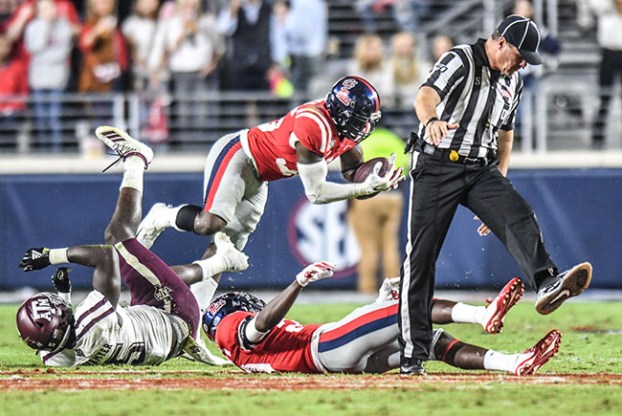 That sums up Ole Miss’ 24-17 loss to Texas A&M on Saturday in a game that was there for the Rebels to claim over and over again.

Instead, a Rebel offense that seemed unsure of what identity it wanted to go caused them to get in their own way all night. The offense’s effort took away from what was a solid night on the defensive side of the football, which kept Ole Miss (3-5, 2-3 Southeastern Conference) in the game until the final minutes.

On Monday, Ole Miss head coach Matt Luke and offensive coordinator Rich Rodriguez confirmed that their game plan the remainder of the season would be to implement a two-quarterback system. Redshirt freshman Matt Corral and true freshman John Rhys Plumlee were both going to play.

On Saturday, that plan off attack seemed to backfire and kept what had been an offense that was a stat-machine from getting any kind of rhythm outside of chunk plays.

The pair combined for 155 passing yards and one interception. Plumlee entered the game needing 74 rushing yards to set a new school record for most rushing yards by a quarterback in a season, but finished with 38 yards on 13 carries.

“We’re trying to put our offense in the best position to win games,” Luke said. “(Plumlee and Corral) have been very unselfish and supportive of each other. Again, there are a lot of plays there to be made. We’ve just got to make them when they’re there.”

Saturday’s game marked the first time the Rebels did not have a 100-yard rusher since their 28-20 loss against California on Sept. 21. Jerrion Ealy led the team with 80 yards and a touchdown on six carries, but the Jackson Prep alum left the game just before halftime due to a sickness and never returned.

On their final drive of the first half, the Rebels had the chance to take the lead, but Luke Logan missed what would have been a career-best 50-yard field goal. It was one of his two missed field goals on the night, the second was blocked.

Ole Miss responded in the second half with a touchdown off a two-yard run by Snoop Conner on the opening drive to take a 14-10 lead. That lead lasted for about six minutes until Plumlee fumbled and A&M’s  Buddy Johnson picked it up for a 62-yard scoop-and-score to give the Aggies the lead for good.

Kellen Mond had a pedestrian game, throwing for 172 yards, a touchdown and two interceptions. The Rebel defense kept Mond in check, getting to him four times and hurried him three times.

The Aggies’ run game was held to 165 yards and one touchdown.

“I thought the defense played their guts out,” Luke said. “(They) gave us a chance to win the football game and we didn’t make enough plays on offense. Obviously, the turnovers were huge. Had a chance to go up two scores and had several opportunities to make plays down the field, but we didn’t make them.”

After their first of two bye weeks next week, the Rebels travel to No. 11 Auburn on Nov. 2.

The rolling mountains of rural Appalachia perfectly represent a unique subsection of America that can be hard to describe to... read more