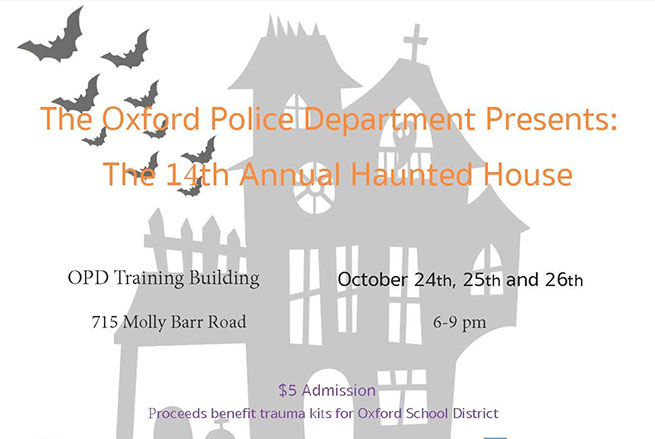 The Oxford Police Department is putting its annual haunted house to good use this Halloween, raising funds to provide lifesaving tools to area schools.

Every year OPD does its haunted house, and the department usually donates funds raised to a worthy cause. There has never been a specifically designated purpose at the onset, but this year is different.

OPD is putting the money raised with this year’s 14th-annual haunted house toward the purchase of a trauma kit for every classroom in the Oxford School District.

It was an idea that came from Capt. Alan Ivy, who teaches active shooter training sessions for the department.

“It’s because I’ve been requested to teach so much, and I’m teaching to be prepared (mentally), but to also be medically prepared,” Ivy said. “We have a way to stop the bleeding before the (emergency medical services) can get there, and it’s with these trauma kits. So, it kind of popped in my head that we raise money every year, and these go hand-in-hand with what I teach.”

Ivy approached Oxford School District superintendent Brian Harvey, who jumped at the idea. Oxford schools have kits, but only so many, and they are located in the hallways, which would make it tough for a teacher or someone in a classroom to get to if an active shooter was outside.

By raising the money, OPD and Ivy hope to be able to purchase enough to place one trauma kit in every classroom. Ivy said the OSD will match whatever is raised by the haunted house.

After approaching Oxford, Ivy also spoke with Lafayette County School District superintendent Adam Pugh about getting Lafayette classrooms the same kits. OSD matching the amount raised by the police department will help get as many kits as possible this year, and Lafayette schools will be fully stocked either this year or next, Ivy said.

“Everybody’s open to the idea and it’s real simple,” Ivy said. “We try to keep things real simple in the training that we do.”

The trauma kits come pre-supplied with all the medical essentials needed in an active attack situation, from gauze and band-aids to gunshot patches and tourniquets. The kits have instructions for how to use all the materials, and Ivy said there are people who can come and train teachers how to use the kits as well.

This year’s haunted house, which takes place at the OPD training building at 715 Molly Barr Road, runs from Oct. 24 through 26. Admission is $5.

A group at Oxford called “Stop the Bleeding,” which is going through medical training, will be working one of the scenes at the haunted house to promote awareness of the importance of trauma kits.

Those who would not like to participate in the haunted house are still encouraged to donate through the Oxford Peace Officer’s Association.

Candidate forums for general elections to begin next week