Oxford’s No Time 2 Cook expanding to Walmart, Krogers across the South 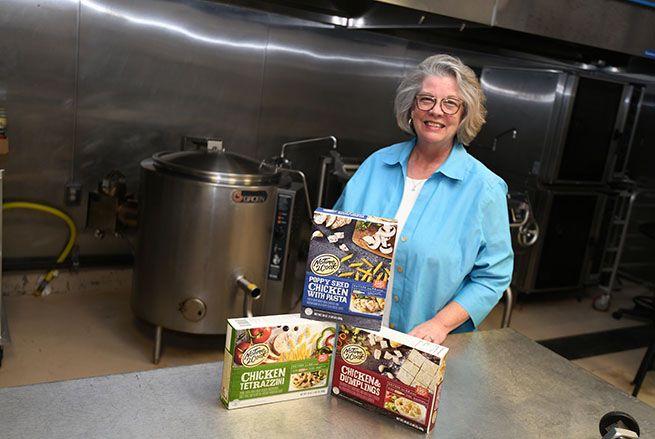 When Karen Kurr began her business, No Time 2 Cook, in 2005, she was preparing dishes out of her home.

Fifteen years later, Kurr has turned her cottage industry into a full-fledged operation.

No Time 2 Cook started in a family kitchen and can now be found in the freezer aisle of Kroger and, beginning next week, Walmart.

From going to farmer’s markets in Oxford and Tupelo and buying a space at The Mustard Seed Antique Mall, Kurr has seen her family recipes become staples in the grocery stores she and her neighbors frequent.

“It literally was birthed in my home kitchen,” Kurr said. “It didn’t take long. Once we got started, just within a couple of months, it just went so well.”

After having to abide by government regulations for cottage industries, Kurr relocated her homegrown business to a facility off of North Lamar Boulevard behind Chicory Market. There, most of the Cajun and southern dishes she’s famous for are made from scratch and prepared to ship to Kroger and independent retailers across the Southeast.

In 2017, Kurr applied to go to Walmart’s open call, an initiative to bring American-grown and based products to their shelves in support of creating more USA-based jobs. Kurr’s business was accepted and invited to the three-day event. The final stage is getting in front of buyers, who then try the product themselves.

If the buyers like the products, a green card is issued to the business owner. Kurr left Walmart headquarters in Bentonville, Ark. with a green card and was invited to come back for the category review that fall.

Around this time last year, Kurr’s products were in 250 stores across the southern region. With the expansion to Walmart, they will be in over 620 stores.

“We’ve more than doubled our distribution in a year,” Kurr said. “We’re in all the deep south states.”

Over the next couple of weeks, Walmart stores in Mississippi, Louisiana, Tennessee, Alabama and Georgia will begin carrying Kurr’s products.

Marketplace at Oxford Commons and Moore’s Store in Batesville off Highway 6 are some of the independent retailers who currently carry No Time 2 Cook products.

Kurr said the catering side of the business has already produced some potential new products that she thinks will find their way the freezer section soon.