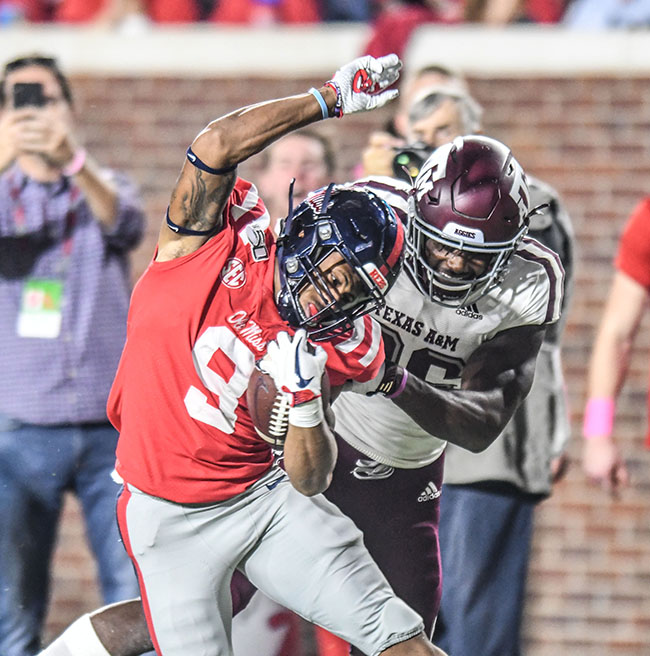 Mississippi running back Jerrion Ealy (9) slips the tackle attempt by Texas A&M defensive back Demani Richardson (26) to score on a 69 yard run in the first quarter at Vaught-Hemingway Stadium in Oxford, Miss. on Saturday, October 19, 2019. (Bruce Newman, Oxford Eagle)

Ole Miss moved the ball better, got pressure on a slippery Aggie quarterback and tackled about as well as they had all year.

But Saturday night against Texas A&M, they simply beat themselves. In doing so, they may have sunk any realistic semblance of hope in a postseason berth.

In a game that fell to favor the Rebels for much of the opening half, they retook the lead early in the third quarter. A five play, 65 yard scoring drive set Ole Miss up 14-10 on Texas A&M, a game in which they were six point underdogs.

The Rebels took a lead, got a defensive stop and had a chance to extend. That’s when things fell apart.

In Texas A&M territory and under pressure on a second and seven, John Rhys Plumlee fumbled the football. The Aggies returned it 62 yards untouched for a score. It was a play in which Plumlee was simply playing loose with the football in the pocket and should have eaten the sack and lived to see another down. Instead, Texas A&M retook the lead at 17-14.

“Anytime you don’t win, and you have two turnovers, you have to look at everything. We certainly didn’t play our best, that’s for sure,” head coach Matt Luke said. “In the Southeastern Conference, there’s a couple plays that make a huge difference. They’re there to be made, we just have to continue to work until we start making those plays and get over the hump.”

Luke would describe that fumble as the “turning point” in the game.

Ole Miss’s very next drive went okay. They moved the ball 65 yards on eight plays, setting up a first and goal from the Texas A&M 10-yard line. A touchdown would take the lead; a field goal would tie. Instead, the first two running plays went for no yards and Plumlee took an eight yard sack on third down. Ole Miss had to settle for a short field goal to tie. From just 35 yards away, Luke Logan’s field goal was blocked.

For Logan, the play marks a breaking point in what’s been a rough stretch this season. After today, he’s 8 of 14 (57 percent) on field goals and has yet to hit on anything past 41 yards. Last week, he missed a big extra point. This week, it was a missed 50-yarder in the second quarter and a blocked 35-yarder in the third.

Then came the third of three consecutive doomsday drives. This time, it was Matt Corral getting his shot at committing the mental faux pas. Rolling left on a first and ten, Corral simply tried to force a ball into Elijah Moore. With Moore blanketed by a linebacker, Matt Corral could have tucked the ball and ran for two or three. Instead, he simply tried to force the ball into coverage. It was intercepted.

“Some of those, like the (Corral) throw on the fade, I think he just underthrew it a little bit,” offensive coordinator Rich Rodriguez said. “And then John Rhys will learn. He’s just a young guy; people forget he’s a true freshman. Sometimes when something’s not there, you can just avoid the big mistake.”

These three plays were far from from the only miscues of the night. Yet the timing, coming on back-to-back-to-back series in a three point game, would eventually doom the Rebels.

For long stretches, it seemed liked Texas A&M did everything in their power to try and let Ole Miss steal this win. In the end, it didn’t matter. The Rebels simply beat themselves.