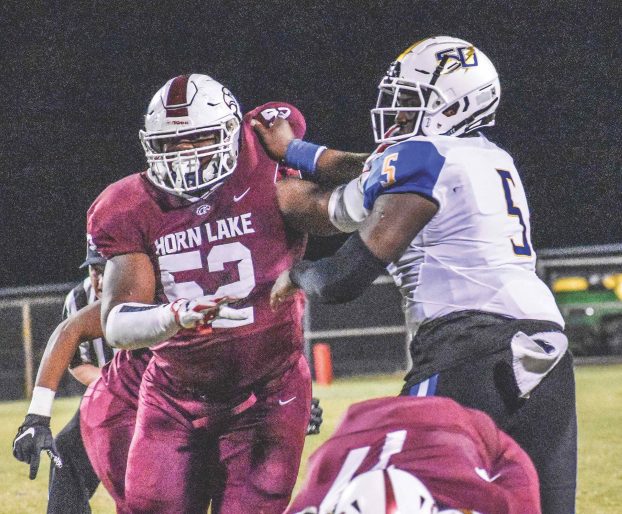 HORN LAKE – Oxford’s trip up north on Friday night came against a team that had struggled, but also one laden with individual talent – the premier Horn Lake talent being that of four-star defensive lineman Josaih Hayes, who is committed to play at Ole Miss in 2020.

Hayes, a senior defensive tackle, is listed at 6-foot-3 and 296 pounds. One may be able to hide a body like that in an SEC football game, but in high school, it stands out instantly, especially after Horn Lake’s 6A state championship win a year ago.

In Friday’s loss to Oxford, he recorded a sack on a play in which he simply bulldozed through the Charger left tackle, and had an additional tackle for loss.

With offers from Alabama, Georgia and LSU, Ole Miss is currently where Hayes has set his sights. The Rebels made an offer to Hayes back in February of 2018, with Hayes committing to Ole Miss in September of this year.

He can’t officially sign until December, but he’s going to be a critical part of the Rebel 2020 class if they can land his signature; he’s currently the second-highest rated player among Rebel commitments.

“Ever since my sophomore year, when I used to go up (to Ole Miss) for junior days, I had the feeling that I wanted to play on that field,” Hayes said. “I wanted to be part of the Ole Miss family and play for coach (Freddie) Roach, coach (Charles) Clark and all those good guys.”

Entering his senior season, Hayes had a few things in mind. Obviously he didn’t anticipate the team struggles, sitting at 3-5, but individually, he’s been working on his get-off. He wants to come off the ball faster and get better at where he’s putting his hands on every play. For Ole Miss, their eyes are set on Dec. 18, the first day players for the class of 2020 can sign.

For the first time in the history of Ole Miss athletics and Vaught-Hemingway Stadium, last Saturday marked the first time... read more