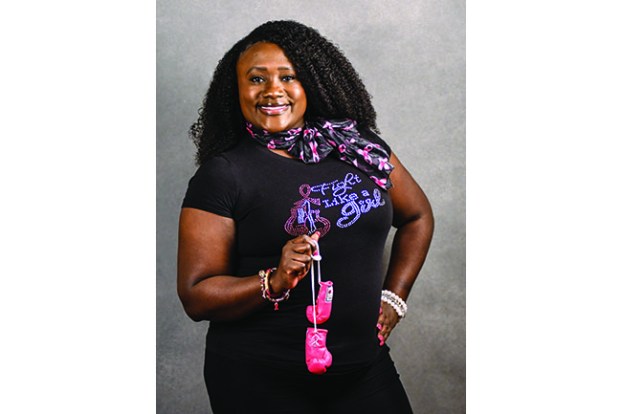 Precious Pratt Thompson will celebrate four years of life after breast cancer this December, and she’ll do it while sending a message.

Thompson, who lives in Calhoun County but works on the University of Mississippi campus, was first diagnosed in 2015 at age 43. Over the next year, she completed 16 rounds of chemotherapy and 33 straight days of radiation at Baptist Cancer Center in Oxford.

However, she said, her cancer wouldn’t have been detected as soon as it was without the help of Dr. Walker Byars, who identified the lump in her right breast two months after a September 2015 mammogram didn’t detect it.

“I still felt a soft patch, that was tender to the touch,” Thompson said. “I went to Dr. Byars for an ultrasound, and he saw it. I did end up having a right mastectomy, just because I wanted it out of me.”

Although it wasn’t easy, Thompson said she felt she had no other choice but to survive.

There are three things Thompson said helped her get through the toughest battle of her life: a strong, faithful background, a praying grandmother and mother, and doctors.

Thompson first began sharing her story with the encouragement of her care providers at Baptist Cancer Center, she said. The reason was simple: breast cancer is an ugly disease, but Thompson never let her diagnosis break her stride.

“To this day, I never cried about it. I never shed a tear. (The doctor) said, ‘It’s cancer,’ and I said, ‘Let’s go,'” Thompson said. “I’ve got four children, and I was like, I’ve got to be there for them. I knew I had people who would take care of them, but no one takes care of your own children like you do.”

Thompson’s youngest daughter is now a senior in high school, on track to graduate in 2020.

While Thompson said she fully realizes not everyone comes through their breast cancer battle the way she has, she also acknowledged that early detection is key.

“Do self-checks at home. If you can’t get a mammogram through your insurance, there are different charitable organizations that pay for mammograms through Baptist Cancer Center,” she said. “If your insurance will pay for an ultrasound instead, go ahead and do the ultrasound.”

One of the most important tips for those fighting breast cancer, she said, is to maintain a strong support system, because mental health is just as important as physical health – and survival is a blessing not to be taken lightly.

Although she is cancer-free and has undergone reconstructive surgery, Thompson is now in a post-cancer prevention and philanthropic phase of her journey. She’s four years into a 10-year round of preventative medication, and last year, she started the Power of Pink Walk in Calhoun County.

This year’s Power of Pink walk will take place on Oct. 29. Money raised will supply gas cards to help women with breast cancer travel to and from doctor’s appointments.

Above all, she’s counting her blessings and taking everything one day, one step, one pink ribbon at a time.

“People don’t realize that everyone doesn’t make it,” Thompson said. “‘God is Good” is my motto.”

The University of Mississippi is in need of a new Vice Chancellor for Student Affairs, as Dr. Brandi Hephner LaBanc... read more