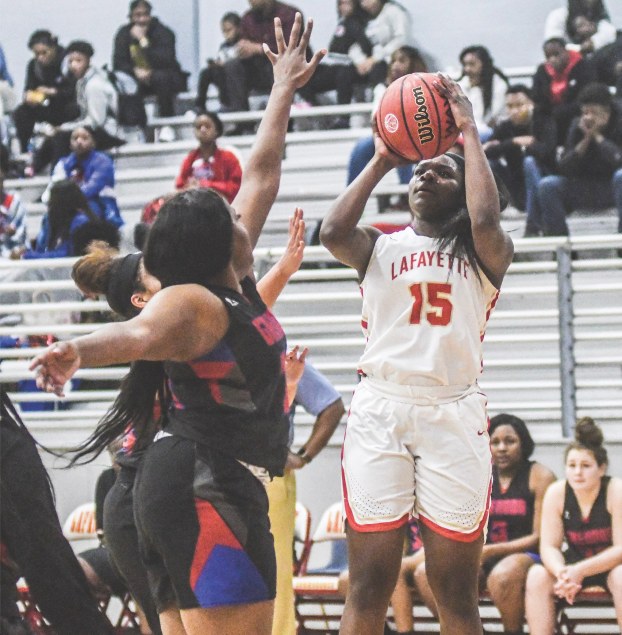 Lafayette girls hoops bouncing back after yet another season-ending loss

The Lady Commodores have been here before.

Last October, about two weeks before the start of the season, Lafayette lost starting forward Xhiir Burgess to a season ending knee surgery. This year, they’re going to be down yet another post player. Six-foot-one center Shanilla Watkins tore her ACL about six weeks ago, and as a result, will be out for the entire season.

The 2019 Lafayette team, whose season begins Nov. 5, will be much smaller as a whole. In addition to losing Watkins, their two post players from last season – Burgess and Mariah Holland – both graduated. To fill the hole, head coach Shane Linzy is just going to go smaller, playing two traditional wing players in Azariah Buford and Kimaya Dixon down low.

“I don’t want to change it up, because it’s been shown to work,” Linzy said. “But you look out there and think, ‘What do we do?’ We’re just going to plug in some other girls and say, ‘Hey, give me everything you got.’ If they do it the way we coach it and teach it, they’ll be fine. Will there be a night that another team has a big post player and we struggle a little bit? That’s a good possibility. But I’m hoping the way we do things takes the pressure off of that.”

Buford and Dixon may be playing somewhat new roles, but the goal will still be the same. These two have been Lafayette’s two leading scorers each of the past two seasons – last year’s culminating in a 27-4 season and trip to the playoff quarterfinals.

Now seniors, they’ll be asked to do something different. Even with the lack of size, the style of play won’t change. This is still going to be a team built around getting to the rim and the free throw line. And those two seniors are still going to need to shoulder a scoring load for the team that will be relatively young outside of them.

“They’ve accepted that new role and they’re kind of enjoying it. But yeah, they’ll be getting a little more beat up maybe with some size disadvantages,” Linzy said. “They’ve been our two leading scorers for each of the last two years. So yes, we’re going to rely on them for offense, but also every other team we play knows they’re going to be our scorers. So, there’s going to be games where they get double teamed a lot and our other girls are going to need to step up.”

Those other girls stepping up are largely going to be younger. Deundria Shaw and Karizma Norphlet are the two names pointed out that have been those girls stepping up. Both are sophomores and both will start after freshman years where they played minutes, but weren’t really relied on at all.

For this Lady Commodore team, one that has gone 51-11 since Buford and Dixon took on the scoring load two seasons ago, to advance further than their quarterfinal appearance in this year’s playoff, those sophomores are going to need to produce. And Buford and Dixon will have to continue being the dominant duo that averaged over 30 points per game combined a year ago.

HORN LAKE – Oxford’s trip up north on Friday night came against a team that had struggled, but also one... read more