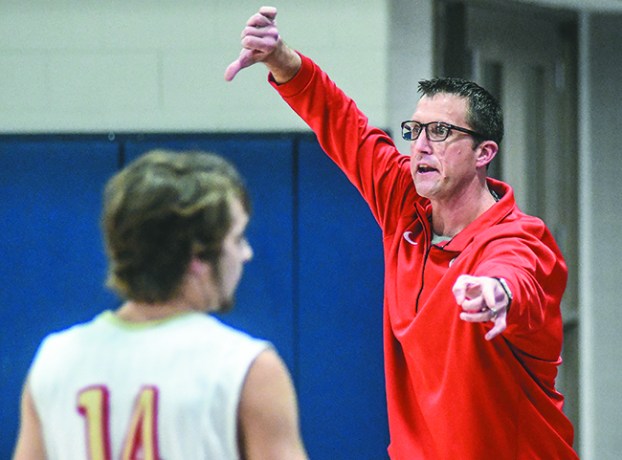 Second-year Lafayette High School basketball coach Brad Gray isn’t as concerned about winning (don’t worry, the win total is on his mind); more so, he’s finding a way to change the mentality, the culture and the way students think about Commodore basketball.

Simply put, it’s a program that hasn’t had a lot of basketball success. This decade, they’ve had just one winning season, yet six seasons where they won five or less games. They’re not used to winning games, or even being competitive. But Gray said he didn’t come to Lafayette to be complacent in that; he’s looking to build a basketball identity.

“It’s definitely been a learning curve. From a basketball standpoint, we weren’t quite as skilled and didn’t quite have the basketball IQ or mentality that we needed to. It’s just the little things on offense or defense that we should know, we didn’t,” Gray said. “So that was a learning curve for me, coming from a program where guys knew what to do.

“And it’s tough. Kids just want to get in the gym and play five-on-five. They want to get up and down, but what they don’t understand is this is like building a house. You have to have brick and mortar and a foundation. That’s what those fundamentals are.”

Building that baseline of competence starts in the summer. It’s repping the little things every day, preaching those fundamentals daily. From ball handling, jump stops and simply making the smart decisions on the court, Lafayette’s working to do “all the boring stuff” before they can do the fun stuff.

The good news is that this is a young team with much room to grow and get better. Nine members of the varsity roster are sophomores. By the end of last season, three of those kids were starting as freshmen – Kylen Vaughn, Mario Wilbourn and Trikyus Woodall. Unfortunately, from a basketball perspective, all three are currently full-time on the football field.

They even have an eighth grader in D.J. Davis, whom Gray said he expects big minutes from. He may be young and inexperienced from a high school varsity perspective, but Davis plays AAU ball and as Gray says, “doesn’t really look, physically, like an eighth grader at all.”

Lafayette’s three leading scorers are all back from a year ago, yet it’s really a team that struggled to score in general. A year ago, they averaged just 42.3 points per game. For the young Commodores entering the start of their season in under two weeks, there’s really nowhere to go but up.

“I think we’ll be better. I do. How much better? I don’t know just yet,” Gray said. “Record matters. It’s not the end-all, be-all, but we have to improve there and I’d like to see us score more. I think if we can score more, we’ll be able to defend well enough to give us a chance in games, and that’ll increase our win total.”

One February night in Starkville has fueled an entire offseason of preparation for the 2019 Chargers. A 24-win season a... read more