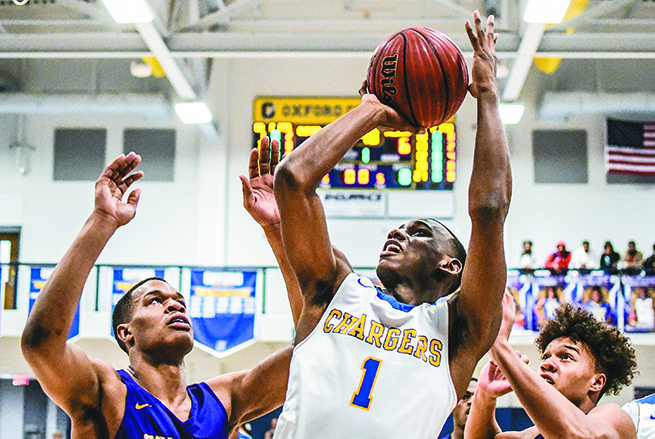 One February night in Starkville has fueled an entire offseason of preparation for the 2019 Chargers.

A 24-win season a year ago ended in the state quarterfinals at the hands of the Starkville team. The Chargers’ entire starting lineup from the last year is back, part of a massive senior class.

For seven Oxford seniors, this year is their final run. And with the 2020 state finals played just down the road in The Pavilion, they’re not going to let their final year end the same way as last year.

“They’ve been together for a long time. Which means they know each other’s skill sets and they play to each other’s strengths,” head coach Drew Tyler said. “It’s good, because we can look to our sixth and seventh man and there’s a lot of experience, initially, coming off the bench.”

This group knows each other really, really well. Led by a big three last year of Kylan Blackmon, Tykel Owens and JJ Pegues, they also bring back a key player who missed the 2018-19 season in Cade McKellar. The Oxford point guard missed nearly all of his junior year with a broken leg.

All of these seven seniors are going to play, and junior Derrius Southern will likely start as well.

Tyler said that Starkville game has been used as fuel for this team ever since they returned home afterward. It opened some eyes, something the coaching staff has seen since in practice and the weight room. It’s been a much more business-like approach to the offseason, one that’s gotten even the kids who had prior not bought into year-round basketball picking one up regularly.

Almost every high school has multi-sport athletes. Oxford is no different; they have kids playing football currently and running track in the spring. But this year, all of those kids have also been playing offseason basketball away from Oxford basketball.

This veteran team is all in.

“They are by no means satisfied. They went 25-7 and lost in the elite eight to Starkville, who won 6A. But they’re not satisfied,” Tyler said. “They know that they can seize this opportunity this year, and play their way, win their way to a home championship game in the Pavilion.”

Tykel Owens is the team’s slasher. He’s quite literally a track star on the basketball court. JJ Pegues is Oxford’s big body, but one who can also step out and hit shots on the perimeter. Derrius Southern is the streaky shooter that can be wildly dangerous when hot.

But this team is going to revolve around the play of senior shooting guard Kylan Blackmon. Simply put, Blackmon is the team’s best player. He currently holds six junior college offers and is getting interest from division one schools. Last year, he was named the MVP of the North team in the Mississippi North-South All-Star game.

“Kylan has improved so much over a short period of time. He’s one of the few players I’ve ever had that has improved that much, that quickly,” Tyler said. “He’s finishing at the goal and not settling for jump shots. And he’s stronger this year and handling the ball like a two guard. That’s why he has a bunch of community college offers in Mississippi and is getting division one interest – basketball will definitely pay for his education.”

If there’s one area in which the coaching staff challenged this team to improve over a year ago, it’s by putting teams away – stepping on the throats when you have the opportunity. Last year, the team went 25-7. In five of those losses, including three to Tupelo, they held double-digit leads before allowing a comeback.

That ability to finish, as well as improvements around the board and experience in the senior class is what can and may decide if Oxford will be playing in the state championships in the spring.

Lafayette swim going to State for first time this…