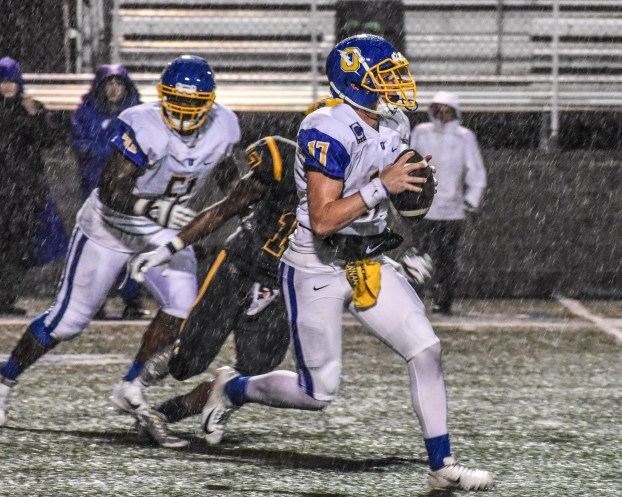 OLIVE BRANCH – Amidst a steady downfall of rain Friday night on the road, Oxford had to fall back on their special teams and cannonball formation to win a highly contested battle against one of the better teams in 6A football.

Oxford (8-1) started slowly, but dominated field position and time of possession against Olive Branch (6-3). Oxford steadily pulled away, pitching a shutout in their 10-0 win.

“It’s fun to play in this weather, football weather. We don’t get to do it too often and I know our guys were excited about it,” head coach Chris Cutcliffe said. “It was a huge game, as far as standings in the region with a really good team. … I was proud of our toughness in these conditions. We played hard tonight.”

With the conditions subpar, both teams leaned on their run games early – the problem being, that neither team could get that run game going. Through the first quarter, each drive by both teams ended in punts and neither team advanced the ball past midfield.

To start the second quarter, a double unsportsmanlike conduct penalty on Oxford moved Olive Branch 30 yards into the redzone, setting up the best chance either team had to score in the first half. The Conquistadors took that gift and simply did nothing with it. They backed themselves up with a holding penalty, before Oxford took advantage of a high snap and blocked a 39-yard field goal attempt. A big special teams play by the Chargers kept the game tied at zero.

With special teams play taking center stage, it would be the punt return game setting up the first points of the game. Oxford’s Byron Pearson, with under three minutes to play in the first half, fielded a punt at the Oxford 40-yard line, returning it 25 yards into Olive Branch territory. With a penalty, Oxford took over the drive at the 25-yard line. Cutcliffe took a gamble late in the half, bypassing a made field goal with 16 seconds remaining to send the offense back out after a penalty. The gamble paid off, as John Meagher hit JJ Pegues for an 11-yard fade route to take a 7-0 lead with three seconds remaining in the half.

“Sometimes, you have to trust your players,” Cutcliffe said. “I knew JJ and John would get it done, and they stepped up. And the defense was unbelievable. We did a great job out front. The staff did a phenomenal job having a plan in place, and our guys executed it really well.”

The third quarter was much like the first – a lot of punts and no real scoring opportunities for either team. It was KJ Wadley setting up the game’s second score for Oxford, breaking a tackle in the backfield on a 3rd and 6 to get a 26-yard run on third down, moving Oxford into the red zone mid-way through the fourth quarter. Jack Tannehill’s 33-yard field goal put Oxford to the insurmountable 10-0 lead with 4:24 to play.

Late interceptions, by Tristian Shorter and Javian Gipson-Holmes (his second of the game), sealed the deal for the Chargers. With the win, Oxford advances to 8-1 (5-0 in Region 1-6A). They need just one more win over the remaining two games to clinch the region.

Only three more weeks of regular season football remain, and both Oxford and Lafayette will have to go on the... read more