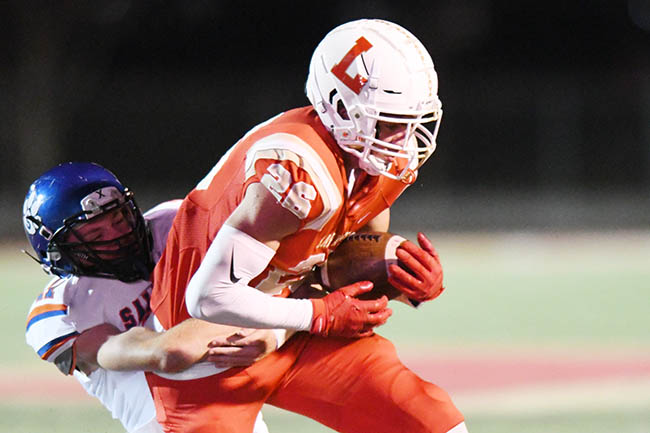 Only three more weeks of regular season football remain, and both Oxford and Lafayette will have to go on the road for two of those three weeks, starting Friday night.

Oxford has the win over Lafayette in the Crosstown Classic, yet both sport just one loss in their classification – both to teams that are arguably the best in their respective classifications with Starkville and West Point. With just three games to play, it’s time to shift everything back into gear and prepare for a set of likely playoff runs.

This week marks Lafayette’s (6-2) longest road trip to date, making the trek out to Columbus to take on New Hope (3-6).

The Commodores have played the last three games without regular starting quarterback Tyrus Williams, who left the game late against West Point with a concussion. As of earlier this week, Williams was back practicing full-speed in pads, so it looks as if he may be ready to go for the first time in a month.

In Williams’ absence, senior Randy Anderson has really taken the quarterback spot back with a vengeance, yet doing so more in the run game. Over the stretch of games Williams has missed, Anderson is averaging 169 yards on the ground, including a career high 256 two weeks ago against Center Hill. If Williams is able to come back in this one, it’ll allow Lafayette to get to a more balanced attack offensively, but it’s hard to imagine them not letting Anderson run the ball his fair share.

The Chargers have certainly tested themselves this year – see their week two game in Starkville – but their biggest challenge in region play comes this week as Oxford (7-1) travels north to Olive Branch (6-2).

First priority on Friday night for Oxford will have to be slowing down the Conquistador rushing attack. Fueled by one of the most productive senior running backs in the state, Olive Branch’s run game is averaging over 222 yards per game this year. Their senior bell cow, Glen Banks II, has already topped 1,000 rushing yards at a clip of 6.5 yards per carry. For reference, in the same number of games, Oxford’s leading rusher is quarterback John Meagher with 496 rushing yards.

The good news for Charger faithful is that Oxford has actually done a really good job stopping the run this year. The raw numbers don’t exactly back up that statement, having allowed 200 rushing yards to both Starkville and Lafayette. Yet a very large chunk of those 200-plus yards they allowed in both of those games came in garbage time, with Oxford either trailing or leading by an insurmountable figure.

Since the start of October, they have yet to allow total 100 yards on the ground. It seems simple, but their ability to stuff rushing lanes defensively will likely be the deciding factor in whether the Chargers can advance to 8-1 and likely wrap up their region.

Water Valley moved their game this week at North Panola up to Thursday night. They won a tight one, 10-8 on the road.

Grant Tisdale: “The competitor in me wants to play”