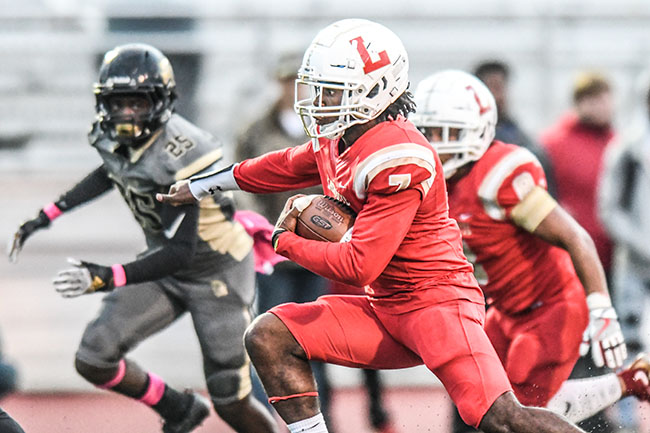 The very next play, Lafayette was already in the red zone.

Randy Anderson took the first snap of the game over 50 yards on the ground down the left sideline, setting the tone for what would be the Commodores’ third straight blowout win. Moving their game from Friday to Saturday evening due to inclement weather, Lafayette (7-2, 4-1 Region 1-5A) ran away with a win 28-7 over New Hope (3-7).

“I’m kind of a schedule guy. I like having it all be the same, and there was no same this week,” said head coach Michael Fair, referring to the game being rescheduled. “I think the first quarter, we started flat. The schedule was way different, but I was proud of the outcome and how they adjusted.”

The entire first quarter was completed after just one drive per team. Lafayette scored in just five plays, Randy Anderson finished off his opening run with a short touchdown scamper to go up 7-0. New Hope’s first drive took nearly the entire quarter, going all the way down inside the Lafayette five-yard line before stalling and turning the ball over on downs.

After the next Commodore drive stalling for a punt, Lafayette didn’t take long to get the ball back. With 8:19 left in the half, the Commodores forced a New Hope fumble midfield. The turnover set up Anderson’s second touchdown of the night, giving Lafayette the 14-0 lead they would take into halftime.

New Hope came out of the second half swinging. The first play of the second half was a half back pass to a wide-open receiver down the right side. Fifty yards down the field, the ball hit off the receiver’s face mask. Incomplete. The play was sort of the ideal representation of the Trojan offense on the night. They would get into the endzone, a 16-yard touchdown on a fourth and three play, but for the most part they sputtered. Multiple times Saturday night, New Hope went for it on fourth down, but they were just one for four doing so – that lone touchdown was the only time they converted.

“The defense played really well. They ran to the ball well,” Fair said. “The first quarter, they started flat, and that’s something we can’t do later down the road. But we got some big stops in the first half. The second half, we gave up a few big plays, but other than that we played really well defensively.”

Lafayette scored twice more in the second half to put the game out of hand. Trikyus Woodall scored a touchdown of his own in the third quarter before Anderson punched in yet another late in the game, his third touchdown pushing Lafayette to the 28-point mark. All four Commodore touchdowns came on the ground.

For the first time since suffering a concussion against Grenada nearly a month prior, Lafayette quarterback Tyrus Williams saw some action on Saturday. Williams didn’t play much, but did see time at both quarterback and receiver, the second of which is new.

“We just wanted to get him out there and get his feet wet tonight,” Fair said. “He’s really fast and he’s got great hands. He’s got a great skill set, so we’d be crazy if we didn’t try some new things.”

Logistically, the game was supposed to be played at New Hope originally. Due to the rain, and New Hope having a grass field compared to Lafayette’s turf, the game was moved to Oxford. Moving forward, Lafayette will now have to go to New Hope each of the next two seasons to even it up. The Commodores now have just two regular season games remaining, next week at Columbus and Nov. 8 vs Lake Cormorant.