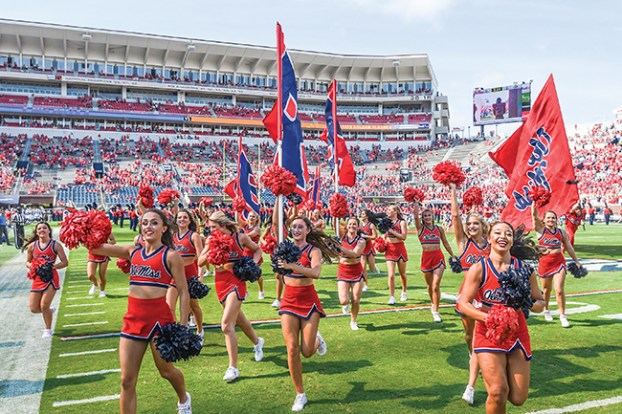 Ole Miss cheerleaders lead the team onto the field for the game against Kent State Golden Flashes at Vaught-Hemingway Stadium in Oxford, Miss. on Saturday, September 22, 2018. (Bruce Newman, Oxford Eagle via AP)

Weeks after releasing the 2020 Rebel football schedule, Ole Miss has made some changes, as announced on Thursday.

A date in mid-October initially slated for a game against Middle Tennessee has been replaced, instead, with the University of Connecticut. UConn, playing their first year of football as an independent team, will now come to Oxford on Oct. 24. This will be the first-ever football game between Ole Miss and UConn.

The game with Middle Tennessee has been pushed back to 2024, also in Oxford.

Also made official on Thursday, Ole Miss will be playing a home-and-home series with Purdue. Put it in calendars now, because this series won’t begin until 2033. The Boilermakers will come to Oxford in 2033, and Ole Miss will head north to West Lafayette, Ind. in 2034 for the back leg of the home-and-home.

Ole Miss and Purdue have only played once prior, a 27-7 Purdue win all the way back in 1929. The most recent time a now-Big Ten school visited Ole Miss was in 1952, when Maryland came to town. They were members of the ACC at the time.

OLIVE BRANCH – Amidst a steady downfall of rain Friday night on the road, Oxford had to fall back on... read more