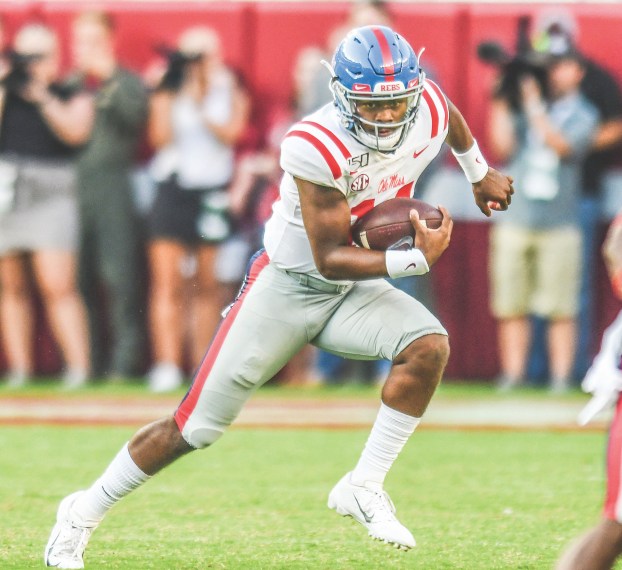 Following the Ole Miss bye week and a trip home to Texas, freshman quarterback Grant Tisdale is no longer with the Ole Miss football team.

As first reported by EJ Holland, his name has been entered into the transfer portal.

Tisdale was not on the field in Tuesday’s practice, prompting obvious questions about his status. The team confirmed that he would be leaving the program.

A four-star recruit out of Allen High School outside of Dallas, Tisdale was originally deciding between Ole Miss, Texas A&M, Ohio State and a handful of other schools in his home state before signing with Ole Miss as part of the 2019 recruiting class.

“It was Tuesday afternoon that Grant and I visited,” Luke said. “He handled it the right way. We’re super supportive of Grant. He’s a great young man. Just with him being the third guy, he just felt like it was time for him to enter the transfer portal and see what his options are. We’re fully supportive of him. We think he’s a great young man and wish him nothing but the best moving forward. We’re going to try to help find him the best place to go.”

This season, Tisdale had been the clear-cut number three option at quarterback behind redshirt freshman Matt Corral and fellow true freshman John Rhys Plumlee. Tisdale only appeared in one game off the bench at Alabama, completing two of two pass attempts with a touchdown. Having only seen action in one game, his redshirt remains preserved.

One of the reasons Tisdale had originally came to Oxford was that two of his college teammates, Greg Little and Jaylon Jones, were on the team or had recently played at Ole Miss. On Tuesday, Jones addressed the media on the situation.

“I just found out. Grant’s my guy and I wish him nothing but the best,” Jones said on Tuesday. “Everything happens for a reason and I support what he did. It is what it is and I just know great things are going to come his way. … Each practice he always kept a smile and worked hard, real hard. He threw good balls and did what the coaches asked. But it’s not my say as to if he should have been on the field.”

For a four-star quarterback to theoretically transfer after being hidden on the depth chart behind other young players is hardly uncommon nowadays. Just since 2015, 48 FBS quarterbacks have thrown passes for two separate schools, many of whom were very highly rated. The last two Heisman trophy winners, Baker Mayfield and Kyler Murray, were transfers, as were current starters at Ohio State, Missouri, Washington and Oklahoma, among others.

With Corral and Plumlee, as well as another highly recruited quarterback committed to Ole Miss in the 2020 class – Hoover High School’s Robby Ashford – it’s a crowded Ole Miss quarterback room. Tisdale presumably saw his best chance to play soon would be leaving Oxford.