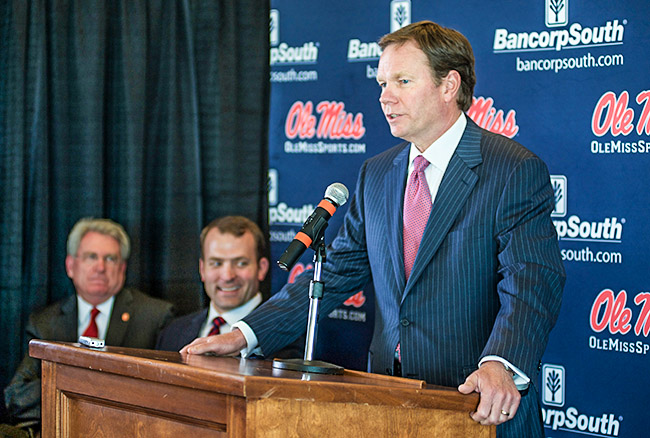 University of Mississippi Chancellor Glenn Boyce officially launched the search for a new vice chancellor for intercollegiate athletics on Wednesday.

Chaired by Ole Miss alumnus and retired FedEx Executive Vice President Mike Glenn, the committee has scheduled an initial meeting, but the information for that first meeting has yet to be made public.

The search committee includes representation from former Ole Miss football, baseball and women’s basketball players, as well as faculty and members of the M-Club.

“On behalf of the search committee, we are honored to be involved in this process designed to identify the best person to serve the University in this key leadership role,” Glenn said in a recent release. “We have been charged by Chancellor Boyce to find someone with integrity, proven leadership in athletics, excellent management and interpersonal skills as well as someone who can be the public face of the University’s athletics department.”

Dellucci, an All-American baseball player at Ole Miss in the 1990s, now serves an an analyst for the SEC Network and resides in Baton Rouge, La. Gillom-Granderson is still the Ole Miss all-time leading scorer in the women’s basketball program. She lives in Oxford and is a chaplain for the school’s Fellowship of Christian Athletes program.

Morris, a four-year letterman at Ole Miss from 1998 to 2002, now runs QB Country, a quarterback coaching academy for high school quarterbacks. Rychlak is a UM Law Professor, where he’s taught since 1987. The last of the named committee members is Wesley Walls, a former Ole Miss tight end who played 15 years in the NFL.

Archie Manning will also take place in the search, but in an “advisory capacity” to the committee, the release stated.

“I have spoken to each of the search committee members, and they are ready to get to work in finding the right person to lead Ole Miss Athletics,” Boyce said. “The entire committee is committed to ensuring that we have the strongest pool of candidates.”

The committee has both reportedly set expectations for the search and set an initial search committee meeting; however, the University has also not released what its expectations are or when the committee will initially meet.

Since Ross Bjork left the job after seven years for Texas A&M in May, former deputy athletics director for development and resource acquisition Keith Carter has been acting as interim athletic director. The University did not mention whether or not they will interview Carter for the full-time role.