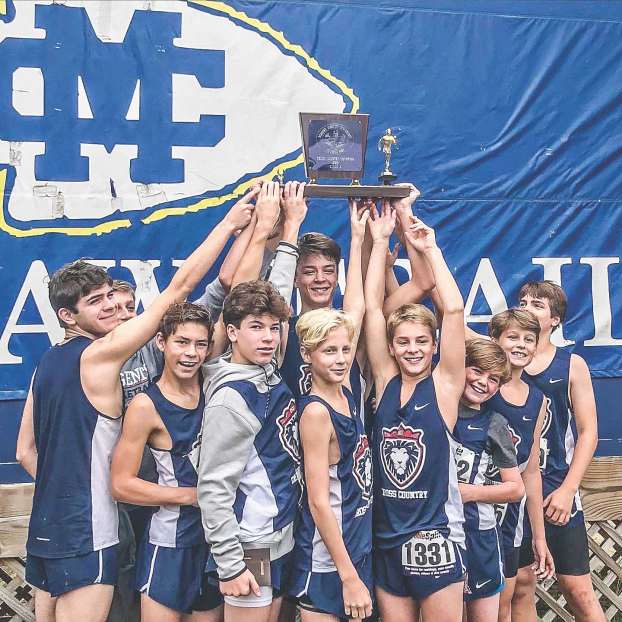 The Regents boys cross country team won’t the MAIS 1A State Championship at the Choctaw Trails in Clinton over this past weekend. In a low-score-wins format, Regents scored 33 points to win the event, with Christ Covenant School finishing second with 56 points.

“We had a great day, we really did. It was a great day and honestly we had a really good season,” said second-year head coach Brandon Beckett. “MileSplit had us ranked first in 1A for almost all the season. We started out well and we really just kept building up until this past weekend.”

The second year fielding a full team, Regents competed as an independent school last year, ineligible to compete in championship events. This year was the team’s first in MAIS, the Midsouth Association of Independent Schools, which spans Mississippi, Louisiana and Arkansas.

In a race of 49 competitors, Regents’ five scoring runners all placed 5th through 13th. At any level of cross country, that’s quite a dense grouping of competitors. They may not have won the race individually, but all held on right there.

“That’s been the strength of our team, the depth. We’re all kind of bunched up right there together, it gives us a really strong team,” Beckett said. “We didn’t have one guy running in the 18 minutes and then a few down around 24 or 25. A lot of teams have that, with one great runner but struggle to put together five good scorers. We have all five right there.”

Jack Berry, an eighth grader, was the fastest Regents runner on the day. And Berry’s youth is a trend among the team. All five of the Regents scoring runners were underclassmen, and four of them were in middle school. It’s a team set up to compete in the long run.

For Regents, an institution making more of a push in athletics as the school grows year by year, it’s a huge accomplishment – their first championship at any level of any sport.